Roberto is sticking by his plan – Interview with Cockney Latic. 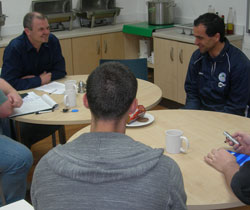 Wigan Athletic’s manager Roberto Martinez was in a much happier mood since the last time we met up and you could sense the weight that had been lifted off his shoulders. But this is where it begins and here are the answers to the questions we needed to ask

A lot has happened since March 4th when we last met up with Roberto Martinez, we have beaten Liverpool and Arsenal and more importantly have achieved exactly what the young Spanish Maestro envisaged for this season. It was always going to be hard, some might say that it will get harder, but Bobby came across as confident as ever that he will take this club to new levels.

The first question broached why we could not put two good results together, Roberto is perplexed himself, but using Portsmouth at home as an example he went on to say it is about breaking teams down. Against Pompey we had come of the back of a superb victory over Arsenal and then playing Pompey we couldn’t find a way through, even though we dominated the game and had around 24 efforts.

It was pointed out that the fans are very frustrated at this and that at the end of the day these are well paid professional footballers who couldn’t hit the target. Roberto said he was pleased with the performance but he was aware of the fact that the likes of Paul Scharner was not capable that day to break a team down. He was always thinking the worst result

Since the turn of the year he thought our performances have been good apart from the Bolton game, we have just not been able to carry great performances against Liverpool and Arsenal on to the next game. Wolves at home was an example of how frustrating the inconsistency of this year is, but he went on to say that it is the likes of the top four; Manchester United, Chelsea etc that can do it game in game out and that is something we have to strive for.

He believed Liverpool was the best performance of the season and afterwards the players were mentally drained, he guaranteed had we played that Arsenal game in the first 6 months of the season we would have lost, it was the experience of losses like Spurs that got us to being able to have that last ten minutes. This is the transitional period we have had this season and every game provides a new experience that we learn from.

On losing Rodallega and N’Zogbia, he said it is just a rumour at the moment but the difference between now and last season is that we have eyes on three players that could come in IF any players were to leave. The previous manager let the likes of Valencia, Palacios et al leave and never had a replacement for them, when Cattermole left at such short notice there was no player on the radar that we could move for straight away. Now is different, there is roughly 120 players being watched over the world that we could go for at any time, covering a variety of different positions and playing styles.

We are therefore in a better position in the transfer windows, if we are to lose anybody it will be on Wigan Athletic terms and we will have a replacement readymade. He said he will stick by 2 more transfer windows to have a team that will not be just fighting to stay up every season but will be looking for top ten, maybe even better. We are looking to have a lot more strength i depth, certainly not a smaller squad, as we might not be as lucky with injuries next year. We can’t focus too much on losing players, what if we keep key players and couple snap cruciate ligaments on the first game? We need to concentrate on getting the right personnel in place.

A lack of will was mentioned by one, to which Roberto immediately shot down, he said a lack of knowledge yes, but not a lack of will or passion. There were a couple of players that he said showed they didn’t have Wigan Athletic at heart and they are not here anymore, they are gone or out on loan.

Ben Watson was brought up and Bobby reaffirmed that the loan to WBA was the best thing that could have happened; he came back having played matches and got the experience he wanted him to gain. The positives now are evident from the Arsenal game; he is clever, skilful and can deliver a ball. On Steve Gohouri, he said that as he hadn’t played for seven months he needed14 weeks to get over the niggles he got and to get the fitness. He was rested because of soft tissue damage and he didn’t want to risk him the last couple of games, he will be available for the last two though.

He believes the core is now very good and the additions will be a goalkeeper especially, which hints that maybe Kingston and Stoikavic will be leaving. He wants Pollitt to stay and says he is still an important character to have around and he is still immensely fit.

He says Paul Scharner has loved every second of being at Wigan, but believes it is probably time he needs to think about moving on, contract talks hasn’t started yet and so time will tell. He was really focussed in the first 2/3 of the season, but lately he is being too honest in putting his thoughts in the papers and he thinks maybe a new challenge is what he needs. One thing that is not in doubt is that he has been a perfect football professional and he should be thanked for his service to Latics. The game against Hull could well be his last game at the DW Stadium, so let’s give him a good shout…

Has the year gone as planned? I didn’t take things lightly and he knows he let people down at Swansea, but Wigan Athletic is Wigan Athletic – it is the only club I would have left for and I had four offers at the time. Before I came I watched every game that Latics had played over the last three seasons, I know the Premier League inside out and it has proved to me that tactically it is harder to win games in the Championship as the ball is in the air a lot more and is a much more physical. The problem has been getting a squad of players together that can play. On cheating in the game this is one area he has changed, as more decisions go against us he now believes that players should do what they need to do to get the decision.

Is Gomez and Scotland still in the mix? Yes they are, I have spoiled their introduction by throwing them in too early. We also have a lot of youngsters that we are developing to come through and the dedication of the coaches will help with their and the other players development. We still need to improve in many aspects, you say the defence needs coaching but take away three games and the goals against comes down by 19 goals. Concentration is something that the team as a whole has to take responsibility; set pieces are especially somewhere that needs to have more effort.

On Marcelo Moreno he says that away from games he is 100% impressed with his effort, at games he has showed a lot of passion and skill but has yet to score that goal. You have to understand that he cost Shaktar €12million and so there is something there, he just couldn’t settle there. He says he is now happier than ever and would love to stay, but we won’t be paying 12 million and they are not looking for another loan but a sale. He works his nuts off and he would have been a different player had he scored at City, but he is very young and this has to be taken in to consideration.

We are looking at the young players we have Momo, Hugo, Charles, Ben, James, Victor etc, these players we want to be working with for 4 or 5 years, so if we are to let them go it will be on our terms and at a price that we set and we WILL replace them with one of the players that are being monitored.

He let us know that we will be going to Austria for preseason and definitely not America, it is a very short preseason and 65 sessions are needed to get the fitness right. There will be three fixtures over there and a couple of here ending with a team at the DW Stadium on the 7th August – it will be a big team but not the likes of Barcelona or Inter Milan as they ask for a lot of money to play over here.

Being drawn on the Driving testgate for Charles, Roberto felt that he did nowt wrong as he can’t read or write English and so got someone to go with him. He feels there should be a verbal one done and then the problem wouldn’t have arisen.

Highs and lows? Biggest disappointment was Portsmouth away by far our worst performance. Best was Liverpool as we outdone them tactically, it was an historic moment for Latics to outplay the best tactical team in the league.

He finished asking us to shout loud and let everybody know how successful Latics are, it is the final game of the season and the players need to know how we feel about Wigan Athletic, so for anybody going or thinking about going, get to the DW Stadium and join in the celebrations. We are now known the World over, Honduras, Ecuador, Ukraine, Peru, Brazil, Spain and France in fact everywhere in the world and it is something to celebrate. All the speculation about teams coming in for or looking at our players is huge testament to what Wigan Athletic are doing and how good they are. Bobby will be looking hard at the World Cup this summer primarily the South American teams and due to wage expectations that is where we can do best.

On who was going to win the league he feels Chelsea are at a major disadvantage playing us on the last game of the season and so who knows.