The sound of gunfire is still ringing around Ewood Park, as Allardyce comes second in this season’s sack race. Meanwhile Latics snatch a point from Goodison, and there’s trouble at Eastlands.

With the controversy surrounding the Premier League rife at present, it all seems like a soap. All we need now is a huge tram crash and a mountain of affairs and the story is up there with the best.

Sam Allardyce follows Chris Hughton down the Premier League trap door after his sacking left the footballing world in shock. Blackburn’s new owners felt that a new man at the helm is necessary for the good of the club’s future, I’m sure many, such as me, will disagree.

Okay, neither he or his football will win any beauty contests but he gets the job done and has done a really solid job since he took the job. If you compare the club’s position when Paul Ince left, and compare it to now, there’s vast improvement. Blackburn have become hard to beat, with a hard working midfield and a tough defence, sacking one of the Premier League’s most established managers is mindless in my eyes.

Still, they move on and look for someone to take the club forward. I have no idea who that man is. Martin Jol maybe? Although I don’t see how he’ll do a better job than Allardyce, he seems like the most likely option. Will Hughton be tempted back into football so soon after his Toon departure? Now that would be a spectacular move.

Blackburn’s defeat to Big Sam’s former club Bolton was the final nail in the coffin, the thing is, nobody was aware of the coffin in the first place. At least it means he’s free to manage Inter Milan like he claims he deserves.

The question now remains, who’ll be the next to be sacked? My money’s on Avram Grant.

Elsewhere, another manager some (mentioning no names) would like to see sacked is Roberto Martinez. His side were thoroughly outplayed at Goodison Park by an Everton side who showed the disadvantage of having a brilliant midfield, yet average strikers. 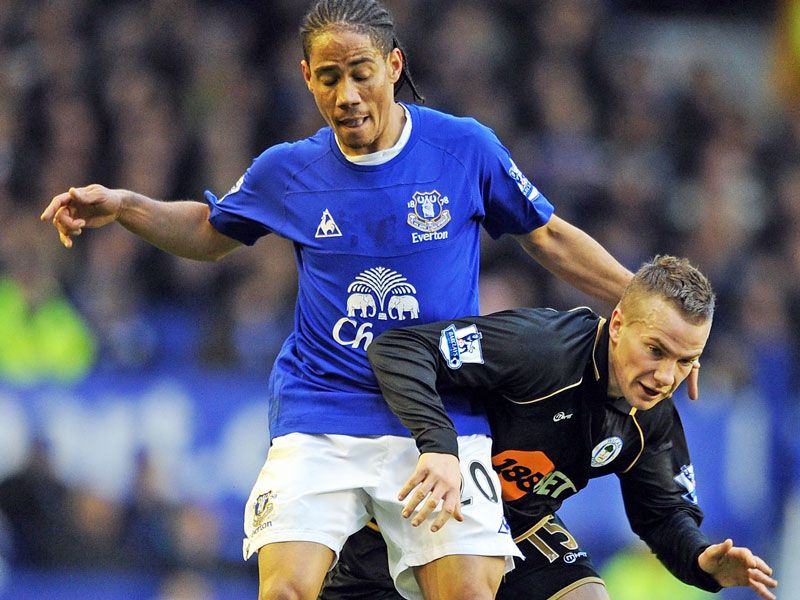 The likes of the diminutive Steven Pienaar, Tim Cahill and Jack Rodwell created a number of chances for Toffees’ strikers Louis Saha and Jermaine Beckford, yet all were spurned. Tim Cahill himself later headed against the post. Having said that, Beckford did have a legitimate goal ruled out for offside; the luck seemed to be on Wigan’s side.

Against the run of play, Wigan nearly stole the points with a hit and run performance on the break. N’Zogbia ran the ball over the half way line with three ahead of him, he played it into Watson who tapped it on to Ronnie Stam. His shot was expertly saved by Tim Howard who tipped Stam’s powerful effort past the post. Latics fans had their heads in their hands as they knew the chance had gone. Yet a point was more than an achievement, and more of a miracle.

Elsewhere, there’s turmoil arising at Manchester City as talisman Carlos Tevez has revealed he’s submitted a written transfer request. The club have confirmed it has been rejected.

This is what we have come to expect of the Argentinean, who has been the subject of controversy ever since joining English football back in 2006. We all know about the infamous ‘Carlos Tevez affair’ which we were very nearly the victims of due to relegation; Tevez then shocked Man Utd fans by joining their arch rivals in 2009, purely because of the money.

Tevez now finds himself at a club he doesn’t want to be at, and with January fast approaching, who’d be brave enough to bet on him being at City come the end of next month? Not me.

The striker could be in the position where he’s hated by all in Manchester; yet he used to be idolised by all, though not all at once. His childish and naive behaviour means that now, his next move is crucial.

Many thought he wouldn’t be a success at City, although he has been in good form on the pitch, his poor attitude and bad reputation goes ahead of him at times. Imagine being in that City dressing room, with outspoken, volatile characters such as Tevez, Balotelli, Adebayor and de Jong, it could kick off at any minute. Thank God Craig Bellamy left.

City didn’t miss Tevez too much on their travel to Upton Park as they ran out 3-1 winners, Yaya Toure was the star of the show as he bagged one and forced an own goal from Robert Green. Adam Johnson came off the bench before rounding Green for the third, the Hammers got one back through James Tomkins, but it was too little too late. The result leaves them at the bottom of the table and a gap is developing between themselves and Wolves. City in contrast are joint top and ahead of rivals Man United, for the time being.

Also in London, Chelsea travelled to neighbours Tottenham in need of a win to spark off their season. It didn’t go too well.

Both teams will be unhappy not to have w on, yet both could easily have lost. Spurs took the lead when Roman Pavlyuchenko scored the opener on 15 minutes, Tottenham looked comfortable and pressed for the second.

Chelsea on the other hand welcomed back John Terry, whose presence made a big difference at the back. Spurs pressed, but failed to double their lead and Didier Drogba initially made them pay, although he was given a huge slice of luck by Spurs’ eccentric keeper Gomes.

Drogba ran on to a through ball in the left channel before smashing the ball left footed towards goal, Gomes seemingly had the ball covered but he didn’t put any weight behind the ball, it then span off his fingers and into the net. An awful goal to concede, but Chelsea were level.

Chelsea then looked set to win it late on when Ramires was taken down in the box by Gomes, he made up for his error though as he saved Drogba’s poor kick low to his left. The controversy surrounding the penalty was because of Frank Lampard’s return to action, should he have taken the penalty? I think not as Drogba is on form and had taken, and scored, every penalty this season up till then. Unfortunately, he missed so it shows what I know.

That result gives United the chance to storm to the top of the table with a game in hand, that’s if they can beat Arsenal at home. The Gunners themselves will be desperate to win to stay on top of the pile, so expect a draw when the two meet tonight at Old Trafford. I’m saying 1-1.

Blunder of the Weekend: Has to be Blackburn’s sacking of Allardyce?

Save of the Weekend: Tim Howard to deny Ronnie Stam, Everton 0-0 Wigan

This Week’s Teaser: How many players have been relegated with four different Premier League clubs? Name them and their clubs.