It seems that the good will created by Christmas has quickly been dispelled and instead my final article of the year may contain a bit of a rant. Brace yourselves…

Being the leading advocate of the ABU Supporters Club (Anyone But United) I am incredibly biased. Let me categorically confirm that I’m probably the biggest hater of Manchester United there is out there. But can you blame me?

I seriously cannot begin to comprehend how easy it’s become for Sir Alex Ferguson to manipulate referees. It would be almost inconceivable for any other Premier League manager to have a period such as ‘Fergie Time’ or any other team to have a closet fanatic as a referee.

This isn’t me demonstrating a severe case of sour grapes, I fully expected us to lose against United on Boxing Day and anyone who thought otherwise is quite frankly a deluded idiot. The red card didn’t affect the result, but it’s the principle that is totally wrong.

The phrase that comes to mind is ‘double standards’, and I’m not the first to think back to last season. 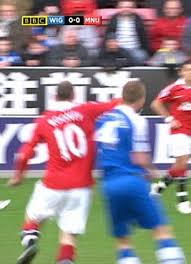 If memory serves (which it does) Wayne Rooney quite obviously deliberately elbowed James McCarthy in the face at the DW last season (right). The outcome? Nothing, not even a yellow card or a foul. Never mind the red card and three match ban it should have warranted.

Fast forward to Boxing Day 2011 and we had a very different situation on our hands, Connor Sammon accidentally caught Michael Carrick with his hand whilst attempting to shield the ball and immediately a red card is produced.

The difference? The role Manchester United played in each event.

It is a fact that Sammon’s red card was quite frankly an astonishingly appalling joke, not one United fan or player even appealed for the decision and the look on the face of Sammon was one of sheer shock.

Am I the only one that thinks it’s getting beyond a joke now? How scared referees and the FA are of Ferguson and his monopoly at Old Trafford. His empire which he has created is crazy, the fact is: no club is big enough to corrupt referees in the way United do.

Manchester United as a club is extremely arrogant and the chant “We’ll do what we want” epitomizes this and accentuates the fan base’s true glory hunter traits.

The fact Rooney didn’t even get a ban for his GBH on McCarthy afterwards demonstrates that the FA are petrified of annoying Ferguson. Dare I even suggest that his presence even affected the Suarez decision? Don’t get me wrong, I’m not suggesting we should tolerate racism but to ban Suarez when there’s no evidence is a little strange.

But United have a history of referees losing it against them and bowing to the pressure of their fans.

United went on an incredible run of over ten years (December 1993 to April 2004) where they didn’t concede a goal from a penalty at Old Trafford. In that time, only three penalties were awarded and subsequently missed (by Juninho, David Dunn and Muzzy Izzet).

To go that long and only concede three penalties is quite obviously not a coincidence but a case of referees bottling it quite frankly.

Since the turn of the millennium until the end of the 2010/11 season, United have only conceded seven penalties at Old Trafford, whilst being rewarded an incredible 31 in that time.

I could give countless other examples of where United’s stature has resulted in favourable treatment from referees but you don’t just want to hear me rant on about United do you?

I seriously hope that Sammon’s suspension is rescinded and the FA demonstrate an ounce of common sense. But we’re little Wigan, what chance have we got?

At least the players can all warm up in t-shirts supporting Connor Sammon if it doesn’t go our way, eh?

The game itself, as you can imagi

ne, was not even a contest, especially when Latics were down to ten men.

United rated us so poorly that they stuck Michael Carrick at centre back and later moved Patrice Evra there too as his partner.

Berbatov, a striker who hasn’t had a look in at Old Trafford this season, managed to bag a hattrick against us.

For his first goal, Alcaraz was skinned so easily he was made to look like a potato by Patrice Evra before crossing for the Bulgarian to finish.

The second of Berbatov’s goal saw him spin Caldwell easier than a two pence coin and left Gary looking like the value of one.

For the fourth time in our last five meetings, Latics managed to concede five without reply against United. Confirming ourselves as very much the one side that Man Utd definitely look forward to playing more than most.

Moving on, Man City’s version of United’s “We’ll do what we want” in the form of “We’ll score when we want” provided great irony when they only managed a 0-0 draw at the Hawthorns.

West Brom managed to hold Man City despite the visitors creating many chances, but unusually, the final product was missing.

The Baggies even nearly snatched a late winner themselves when Jerome Thomas’ drive struck the foot of the post.

As a result, it was honours even and City failed where Latics succeeded by not beating West Brom. I knew we’d get something over them this season.

The combination of the two results meant City and United are now level at the top of the league with 45 points each from 18 matches, with City top only by courtesy of the five goal difference obtained at Old Trafford.

Passing the 45 point mark so easily at least means both will stay up this season, which is more than can be said for Wigan, Bolton and Blackburn who still make up the bottom three with only Rovers taking a point from the Boxing Day fixtures.

Although despite Scott Dann’s ruptured testicle, Steve Kean has refused to comment on the sack. Sorry.

Gary Cahill looks set to leave the gloomy depression which is the Reebok in the following week and Chelsea look like the likely buyers. A long term replacement for Terry? Let’s hope it’s a short term replacement so John’s off our television screens as soon as possible. Spurs and Arsenal are still outsiders for the centre back’s signature.

As mentioned, the January sales are on their way and being down there, Wigan are likely to be linked with many during this period. Whilst Martinez has promised he won’t panic buy, it’s clear that the squad needs strengthening. I’d suggest three new centre halves, a winger and a striker at least. The likes of Kiko Macheda have been mentioned, but can I suggest Billy Sharp? £3 million would probably bag him and he’s a fox in the box poacher who deserves a shot at the Prem, is he worth the risk?

As for the three centre halves, I have few suggestions. But hey I’m not the club’s chief scout so that’s not my problem.

Goal of the Week: There were no screamers on Boxing Day, but Juan Mata’s finish was a good as any other. Previously, Demba Ba’s double against West Brom was sensational, I say take your pick.

Neil Davids of the Week: You’ve got to hand it to Berbatov, a cheeky back heel against Fulham and a hattrick against Wigan was the perfect way to silence the doubters. See, I’m not that biased.

David N’Gog of the Week: Charlie Adam’s comical own goal gives him the donkey of the week award just ahead of Mark Clattenburg for getting clattered by Gabby Agbonlahor.

Quote of the Week: MOTD commentator: “The last time Ji-Sung Park scored, United scored eight. Is that a sign of things to come today?” How many of you granted that cheeky comment with the typical ‘F*** off’?

Boselli Watch: After hearing of the racism scandals involving Terry and Suarez, mighty Mauro thought he’d get in on the act. Never one to be outdone, Boselli turned up to a club game in a KKK suit and has been given an eight match ban. It was later rescinded when he shook hands with the opposition players.