Tis The Season To Be Jolly

And so it proved for Latics who did something they failed to do since November 2006: win consecutive away games.

A lot has changed since those days of Jewell, De Zeeuw, Heskey and co; yet it’s a fate which has gone half a decade without repeat. Before you all go rummaging through the website’s past seasons results list, I’ve saved you the great hassle: Fulham and Bolton were the opponents the last time it occurred.

In a tight affair at the Hawthorns, a ground Wigan haven’t won at since Jimmy Bullard scored a last minute winner back in September 2005, Jordi Gomez was the hero with the winning penalty.

Of course, the Gomez debate is as fiercely argued one as any other amongst Wiganers. Some see him as a skilful genius, Wigan’s equivalent to Messi; yet some see him as a bone-idle and lethargic oxygen stealer who’s probably never ran more than ten yards in his life without stopping.

It’s easy to see both sides of the argument (minus the exaggerations), it seems that Gomez has just about shaken off his tag as the ‘scapegoat’.

Most teams have one, don’t they? A donkey player who will take the criticism for the team’s under performance, probably unwillingly, but he has no choice.

Arguable past examples include Lucas Leiva, Emile Heskey and Titus Bramble; the latter two for various clubs and even their country in Heskey’s case.

David De Gea is fast developing an unwanted reputation as United’s scapegoat for fickle fans who fail to see that the team’s performance is a collective thing, not just an individual matter.

Yet fans feel the need to vent their anger at a particular person, usually an underperforming player, and when a player is perceived as lazy or is struggling to score goals, they are vulnerable in this case. Think Berbatov, Torres, Scotland…

Wiganers have generally identified Martinez as the person for this role recently, blaming the manager for the team’s poor results does seem to make more sense than just one player to be fair.

I suppose that’s why it’s such a pressure position. I don’t think anyone would enjoy having the responsibility of the club’s future and millions of pounds on their shoulders, and with every decision they make scrutinised at every opportunity, it just adds to the pressure.

Personally, I think Gomez wasn’t given a fair crack of the whip by the fans in his first season, it particularly didn’t help when he was a foreigner adapting to a very different league. This no doubt had adverse effects on his performances and was probably a factor in Martinez leaving him out.

Now he’s shook off that tag, I think we’re seeing a better player in Jordi Gomez.

His best position is undoubtedly in the hole I think as he neither has the pace to play out wide nor the work rate or aggression to play in the centre of midfield.

With the current 3-5-2 system he seems to be in his natural birth behind a striker yet predominantly from the right side. As we saw against Blackburn, he has the ability to cut inside and score screamers with his left foot (sort of).

Say what you like about him, but he does know how to take penalties (from recent evidence anyway) and he’s got a mean free-kick. 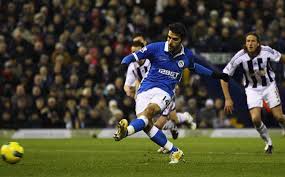 Gomez’s two spot kicks against Sunderland and West Brom may not have been spectacular, yet a goal is a goal and we’ll take any at the minute. Especially when you consider the ropey penalty takers we’ve seen in recent years (Todorov, Watson, Rodallega).

In comparison, Jordi is like a more elegant David Unsworth!

Two goals which weren’t unspectacular were the other two in the game at the Hawthorns. Steven Reid curled home a beauty of a free-kick to show that he brings his shooting boots out against Wigan, remember that corker he scored for Blackburn at the JJB on New Year’s Day 2006?

It would have been very plausible to think that was the end for Wigan, such is the firepower, yet Victor Moses curled a corker into the top corner just minutes later from the blue to restore parity.

With sixty four shots and no goals previously this season, it’s about time he bagged one!

West Brom undoubtedly could have won the game if they’d taken their chances and had a penalty given for a dubious challenge by David Jones. Personally I thought the referee made the correct call, but then I would, wouldn’t I?

I’m not complaining about the game nor result at all however, in our current situation, any point is an invaluable point and a win is a near moment of ecstasy. The games we need to win are games against teams around us, never mind how scrappy. Sunderland and West Brom will do very nicely for me thank you very much.

Despite winning and climbing off the bottom and even out of the relegation zone, Wigan knew they’d fall back in there regardless of the result between Blackburn and Sunderland at the Stadium of Light. Typical.

Simon Vuckevic thought he’d spoiled Martin O’Neill’s inaugural match as Sunderland boss with a first half goal, yet a late turn around saw the points go to the home side with goals from David Vaughan and Sebastian Larsson.

Meanwhile at the bottom, Bolton have taken Wigan’s privately owned 20th place in the league table after yet another defeat, this time at home to Aston Villa. Despite the win, Heskey still couldn’t score. At least he wasn’t hitting it out for a throw in this week.

At the top, United returned to form just in time for their meeting with Wigan with a 4-1 win against Wolves to prove their European heartache wasn’t the end of the world exactly. Man City’s subsequent loss at Stamford Bridge means the title race is still well and truly on with just two points separating the top two. When will Mancini realise that James Milner is in fact not the player he needs to play in these big games, especially when Samir Nasri and Adam Johnson are on the bench?

Finally, Spurs can consider themselves very hard done by after their 2-1 loss at Stoke City, who named Chris Foy as their man of the match. Foy’s puzzling decisions which denied Spurs two penalties and a legitimate goal plus the sending off of Younes Kaboul led to many angry Spurs fans attacking Chris Foy with abuse via Twitter. Unfortunately, the tweets reached the cyclist, and not the referee. Who said football fans are lacking in intelligence?

Goal of the Week: There were some corkers this weekend, but can you beat that man Robin Van Persie right now? His volley against Everton was worthy of winning any match.

Gary Teale of the Week: It has to be Jordi doesn’t it? It’s not often we have winning goal scorers so let’s celebrate!

Gary Neville of the Week: Luis Suarez, he’s reminding me more of Tevez every week. The main man for Liverpool like Tevez was for City last season, he might score one goal a game but he’ll miss about twenty as every chance the team creates goes to him. Plus his recent antics including racism and obscene gestures don’t make him too endearing to the watching fans.

Quote of the Week: “If you’re a United fan who likes cooking, you’ve got to love herbs but you can’t beat basil.” Anonymous

Boselli Watch: Celebrating Christmas in his own unique way, Mr Boselli breached club discipline by going out and getting leathered the night before a game. His reasoning was: “If you can’t score, hit the bar instead!”