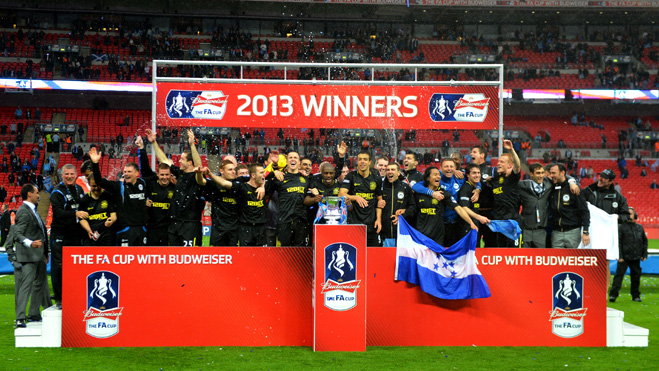 On May 11th, 2013, Wigan Athletic beat Manchester City in the final to win the FA Cup for the first time in their history, but that glory was overshadowed when relegation to the second tier of English football was confirmed just three days later.

The 2012/13 campaign was a season of mixed fortunes for Wigan and ended a run of eight consecutive seasons in the Premier League, as they became the first team to win the FA Cup and suffer relegation in the same season.

Let’s take a look back at the defining moments of that season.

The 2012/13 campaign was the eighth season in the Premier League for Wigan, having been promoted to the top flight for the first time in 2005. The majority of seasons saw them battling to beat the drop, but they somehow pulled out the performances when needed.

They won five of their last six in the season before, to pull themselves clear of danger, but many pundits predicted another struggle if they got off to a poor start again. Although there was also talk of challenging for Europe if they could get off to a flyer.

An opening day defeat to Chelsea wasn’t exactly reason to panic and that was followed with a fine away victory at Southampton. However, that win could not spark a run of good form and The Latics picked up just two points from their next six matches.

There were some good performances, with victories over Tottenham and West Ham showing that they certainly could compete in England’s league. However, defeats became more and more common and Wigan dropped into the bottom three for the first time in the season after a losing to Norwich City in the middle of December.

Between that defeat and the end of the season, Wigan climbed above seventeenth just once and everyone at the club was hoping for another great escape. Unfortunately, that escape didn’t come.

There were some solid performances during the 2012/13 campaign and things could have been different, if it wasn’t for a few stand-out moments which could, in hindsight, be mostly responsible for Wigan being relegated.
Here are five pivotal moments, which defined Wigan’s final season in the Premier League.

In stark contrast to Wigan’s disappointing performance in the league, the FA Cup provided fans with plenty to cheer for and somewhat papered over the sadness felt at dropping into the second tier of English football.

When the FA Cup campaign kicked off, in January 2013, Wigan were eighteenth in the league and had just suffered a 4-0 defeat at home to Manchester United. A third-round draw against Bournemouth meant an unwanted replay, but a 1-0 win in the return fixture meant a place in round four.

Victories over Macclesfield and Huddersfield set up a trip to Everton for the Quarter Final. The Merseyside team were challenging for a top six position and had won the previous meeting, in the league on Boxing Day 2012.

League form and status were thrown out of the window though as Wigan scored three stunning goals in three first-half minutes to win comfortably and reach the Semi Final for the first time in their history.

Wigan went in to their last four fixture as favourites, against Championship strugglers Millwall. The match went according to the bookie’s predictions Wigan’s 2-0 win meant a final against defending league champions Manchester City would be their next and final challenge of the 2012/13 FA Cup campaign.

City had been crowned English football league champions the previous season for the first time since the mid 1960’s and the foundations were being built for a team who have recently been talked about as one of the greatest in Premier League history after a dominant 2017/18 campaign.

Wigan were the outsiders and had exceeded expectations when they were still level at 0-0 as the game reached the 90th minute. History was made in injury time as Ben Watson scored the only goal of the game to give The Latics their first ever major domestic trophy and replace the fear of relegation with the feeling of jubilation upon being crowned FA Cup winners.

If you haven’t seen already, the Supporters Club are holding an event at the Stadium on June 2nd to celebrate the 40th Anniversary of Wigan Athletic being elected to the Football League.

The Cups will be there and players from across the decades. Click here for more details