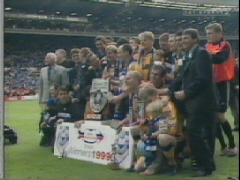 This season is the 25th Anniversary of the Freight Rover Trophy victory. Back in 1985, Latics were 3-1 victors at Wembley and the Supporters Club Annual Dinner on March 19th 2010 will revolve around this theme with a reunion of the team that played that day.

This season’s Wigan Athletic Supporters Club Annual Dinner will be held in the South Stand Suite of the DW Stadium and hopefully we will have as many of the players that helped to win the Freight Rover Trophy there to celebrate the occasion.

Latics fought their way through five northern area games before eventually beating Mansfield Town on penalties to reach the Wembley final against Brentford. It was a dream day for us as we swept our southern opponents away, winning 3-1 with Mike Newell, Tony Kelly and David Lowe on the score sheet.

This Dinner has the makings of being a classic and shouldn’t be missed. Tickets are now on sale and can be ordered by emailing info@wastc.co.uk, by calling in at the Supporters Club on match day or by ringing Spike on 07816150106.

Prices start from £30 for single seats, a discount of 10% will be given for full tables of ten being booked. All tickets must be paid for up front and it will be a first come first serve basis.

This issue and many more are being disucussed on the Away Travel message board, click here.