Everybody’s has come across that highly irritating lad who came out of the womb bearing silver cutlery in his mouth. Although you weren’t necessarily envious of his riches, you simply disliked him because of the way he flaunted it. No, I’m not on about Hugo Taylor I’m A Celebrity… fans; I’m merely introducing my interpretation of Chelsea FC.

For me, the fact their off field antics outweigh anything entertaining they do on the pitch is an important factor. Another is the mindless strategy of their owner: Mr Abramovich. 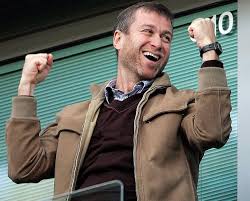 Besides his goofy smile and snobbish clap (which get worse every time the camera zooms in on him after Chelsea score), the worst thing about Abramovich is his impatience, and rash decision making when it comes to firing managers.

I’m surprised it took him a whole season after buying Chelsea to sack Claudio Ranieri when he only managed a second place finish in the league and semi-final spot in the Champions League. To be fair to Roman, his next appointment, Jose Mourinho, was an excellent one. He masterminded a vintage Chelsea team which won the Premier League twice, FA Cup once and also Carling Cup twice. This man was one of the greatest managers on earth, yet Roman still managed to convince himself to let go of him (albeit by ‘mutual consent’).

I acknowledge it was probably down to personal issues between two massive egos but I don’t get how you can sack a manager who’s been so successful, especially when you consider his glories since leaving Stamford Bridge.

Here’s how it went:

Phil Scolari. Sacked. Carlo Ancelotti. Sacked. Andre Villas Boas. Sacked. Roberto Di Matteo. You guessed it, sacked. The only manager Abramovich seemed satisfied with (at first anyway) was interim manager Guus Hiddink, but he rejected the offer of a permanent role, probably through common sense and the likelihood that he was only a goalless draw away at a mid-table club away from the Job Centre.

All of the aforementioned will have felt disappointed to be sacked, Ancelotti earned Chelsea a league and cup double in 2010 before being let go in 2011. How easily things are forgotten it seems. Yet I still can’t get my head around Di Matteo’s sacking.

Clearly, Di Matteo wasn’t a big enough name to satisfy Roman’s empire, he was merely a stop gap until Guardiola became available. This seemed to make sense as appointing a former popular player would keep the fans happy. Despite never seemingly being Roman’s number one choice, Di Matteo surprisingly made his European dream come true, albeit in very defensive fashion.

This worked against Roman though, as this triumph, combined with victory in the FA Cup final against Liverpool, meant even he couldn’t sack Di Matteo. He had to offer him a permanent contract, especially as Guardiola wanted a break after leaving Barcelona.

To sack him now then seems to defy logic. If Roman is waiting for Guardiola to come calling (possibly in the summer) surely it would be easier to keep Di Matteo until then?

Maybe he saw the terrible run of results which have seen Chelsea fall to a mountainous four points behind the leaders as an opportunity too good to miss and pulled the trigger before Di Matteo picked results up again. Now Rafael Benitez is only the ‘interim manager’ until the end of the season, if Guardiola does become available in the summer there’ll be little venting anger over Benitez’s departure. In fact, if Guardiola wants the job tomorrow, I doubt Chelsea fans would cry at another change in manager.

To heckle your new manager on his first game in charge perfectly demonstrates why Chelsea are the team I dislike the most at the moment. I realise that they’ve had some history, but you’ve come to support your team, presumably you want to see them win; will holding banners saying ‘RAFA OUT’ help this happen? Maybe this was all part of Roman’s plan after all.

After all the controversy at Chelsea over recent times, this just takes the biscuit. They are a club based on drama. I’m sure we all remember times when football teams earned press for playing football. Now the back pages are dominated by footballing politics, race rows, contract disputes and diving accusations.

This is why Chelsea will never knock Man Utd off their perch in my view. You may criticise Sir Alex all you like (and I’d support you) but at least he brings stability to the club. If there’s any trouble makers, then they’re out of the door before you can say Juan Sebastian Veron. Look at players like Tevez, Fergie didn’t stand for his antics. He also knew when to let go of stars such as Hughes, Cantona, Beckham and Keane at the right time. Chelsea will never achieve the same status until they pick the right manager and stick with him, and that man might only ever be Jose Mourinho, to the regret of Abramovich.

To bring this back to a Wigan Athletic perspective, the above are many of the reasons I see no attraction of supporting a massive club, where fans are fickle and treated as nothing more than revenue generators by the club themselves. I also couldn’t stand the drama or the politics of it all. Say what you like about Whelan, but he’s made our club very stable and hasn’t jumped the gun when firing any manager since his arrival. He may come out with some controversial comments now and again, but do they cause much of a stir? Not really, he’s only the chairman of little Wigan after all.