The the inevitable meeting of Milton Keynes Dons and AFC Wimbledon finally took place in the FA Cup Second Round on Sunday. The match itself was bedraggled in a unique atmosphere which reflected the circumstances it was played under. Unlike any other footballing rivalry, this one consisted of a bitterness, anger and hurt existed beyond that demonstrated by any other fixture.

The first meeting between the sides since their controversial inceptions a decade ago represented how far AFC have come. Five promotions in nine seasons is something unheard of outside the fantastical setting of Football Manager (who fittingly, also sponsor AFC Wimbledon).

I know it’s easy to jump on bandwagons, but I joined many a neutral who watched the game on ITV and willed for an AFC victory. I celebrated Jack Midson’s equaliser and was genuinely gutted by MK’s last minute winner, even more so than I usually am when Latics lose. To truly understand the injustice of proceedings, you must first rewind ten years to May 2002.

At this stage, the original Wimbledon were struggling massively, on the pitch and off it. The Dons had stagnated in Division One and were in a financial mess. It was then proposed that the club should move 70 miles north from its original base, to Milton Keynes.

Despite the move being strongly opposed by the FA, whose rules state a club musn’t locate more than 25 miles from the place it takes its name, the move was confirmed on May 28th 2002. Imagine that, it would be like Wigan relocating in Fleetwood.

The reasoning behind the move was that losing the integrity of which the club was build upon and seeing the club struggle without moving ‘would not be in the wider interests of football’.

So, the Wimbledon fans had two options: keep supporting the club, or make their own new one from scratch. It’s needless to say which option they took and in June 2002, AFC (A Fans’ Club) Wimbledon, the phoenix from the ashes, was born.

That quote ‘ would not be in the wider interests of football’ was used as a rallying cry by angry Wimbledon fans who felt a burning injustice from having their club stolen from them. A little like slightly pompous famous Latin slogans such as ‘Audere Est Facere’ and ‘Arte Et Labore’ that have underscored Tottenham and Blackburns’ badges and motives in recent years, this quote was used by AFC fans to never forget why they reformed their proud club. It should have been printed above the tunnel at Kingsmeadow, like the famous ‘This Is Anfield’ sign.

The club was born, but it needed a set of players to match its set of exemplary fans. So, on 29th June 2002 at Wimbledon Common, trials were held for the new club. Only 60 were expected to turn up, but 300 actually did. By the time they played their first game on July 10th, 4,657 turned up to see AFC lose 4-0 to Sutton United in a borrowed kit. The score didn’t matter though, because the game represented the first small step in resurrecting their famous club.

In the nine seasons that followed, AFC were promoted five times in what must have been an enthralling experience for the fans. It was probably relatively easy for old Wimbledon fans to jump on the bandwagon when it first started, when the feelings of injustice were most raw. To persist with the idea through all the obstacles and chase the unlikely goal of one day reaching the Football League must have been tou 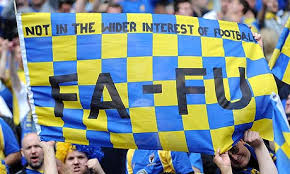 gh. But the whole of football was behind them, every ‘neutral’ in the land was rooting for AFC Wimbledon and the aforementioned quote regarding the ‘wider interests of football’ was a reminder of exactly what all this hard work was for.

In May 2011, at Eastlands, AFC Wimbledon beat Luton Town in the Blue Square Bet Premier Play Off final on penalties to seal their return to the Football League. It was a momentous occasion which will go down in footballing history.

The fairytale nature of the whole story was best demonstrated by the shootout hero, AFC’s goalkeeper Seb Brown, a lifelong Wimbledon and then AFC fan. He was there on the terraces at the Dell in 2000 when Wimbledon first entered the slippery slope when relegation was confirmed with a 2-0 defeat to Southampton. As a kid, he cried that day. As a man at Eastlands, he cried with joy after the impossible was achieved.

As for MK Dons, well they’ve stayed in the football league ever since their official birth in 2004, earning success in League Two and challenging for promotion from League One in recent years. They’ve also had some pretty large footballing figures at the helm, such as Paul Ince and Roberto Di Matteo.

Yet the acrimonious nature of their birth must be an issue for their fans. Exactly who supports MK Dons? And who did they support before Wimbledon moved to Milton Keynes in 2004? Milton Keynes already had a team (and still do) in Milton Keynes Town FC, who have been marooned in non-league for some time. Have the 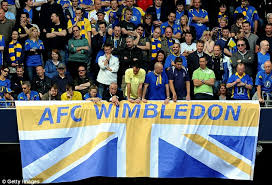 Personally, I don’t know how MK Dons fans sleep at night. They haven’t earned the right to be in the Football League. There are hundreds of small football clubs in non-league that would kill for a place in League One, and then MK Dons come along with no history, no promotions and steal the place of Wimbledon at the expense of the Dons’ fans. It’s an outrage.

The whole affair and revival of AFC shows that fans can make a difference. Fighting for what you believe, fighting for justice and fighting for your club can be successful against all the odds. It is the ultimate footballing fairytale.

I’ve always said that football fans shouldn’t be afraid to follow other teams and I stand by that. I for one will follow AFC Wimbledon’s results and I hope desperately that they can stay in League Two this season. Maybe one day they’ll be back in the Premier League too, just like Vinnie and co back in their 80s pomp. If AFC had beaten their technical superior counterparts on Sunday, it would have presented a moral victory for football.

Not in the wider interests of football? Try telling that to the fans who stood by their morals through thick and thin.