Another Week, Another Defeat

This is turning into a bit of a routine, isn’t it? Latics’ eighth defeat in a row has left Martinez under fire and Wigan rock bottom. At least getting criticized for our poor form is a change from being slammed for poor attendances?

Okay, that’s a bit of an optimistic silver lining for a cloud that’s getting even greyer than Graham Kavanagh’s hair with every week that passes. It seems that no matter how hard they try, Martinez and his players can’t scrape a point from anywhere, never mind a win.

This week’s defeat, the latest in a long line, was against Wolves; a side that we’d beaten in the previous three meetings, unfortunately, this provided false hope and a red herring for yet more disappointment.

Yet it could all have been so different, if Hugo Rodallega had practised hitting a cow’s backside with a banjo, then we would have been 1-0 up after 30 minutes. He missed that chance however, and Wigan found themselves 1-0 down after 31 minutes.

Latics were then presented with a great opportunity to draw level just prior to half time as Emmerson Boyce was felled in the box, the referee pointed to the spot and up stepped Ben Watson.

Watson, not quite the cool customer that previous penalty kings Ellington, Roberts and Unsworth were in the past, looked a nervous figure as he stood waiting to take the penalty. 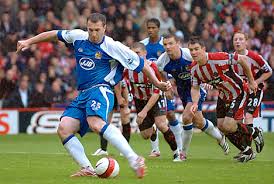 He managed to miss the penalty in fact, for the second time this season, but luckily, he fired in the rebound. I think that’s the first shred of luck Latics have had all season, isn’t it?

In the end, despite going in at half time at 1-1, Latics fell apart defensively at critical points of the second half and Wolves pretty much walked the ball into the net twice to seal a 3-1 victory. Gutted doesn’t sum it up.

Those goals were scored despite the excellence of Ali Al-Habsi who made a number of seemingly impossible saves to keep the ball out, if the other ten out there played as well as Ali, then Wigan would definitely not have lost on Sunday.

Yet, the harsh reality and inconvenient truth is that all these ifs, buts and maybes count for nothing. The fact of the matter is that a goalkeeper is only really as good as his defence, in the end, Ali’s great saves only kept the score down and didn’t yield a positive result.

Just when you thought it couldn’t get any worse, Alcarin Alcaraz then disgraced himself and the club with an act of disgust and petulance.

Despite being captain for the day in Caldwell’s absence, Alcaraz only succeeded in setting a poor example not only by his performance on the pitch, but his terrible act of spitting at an opponent too.

Quite rightly, the FA have issued him with a three match ban and I for one am ashamed that a player of the club I support is setting that sort of example. I realise he’s frustrated, we all are, but spitting at another person in any situation is disgusting and is never acceptable. I just hope Bobby gives him a stern word, which I can’t really imagine but I can envisage Mr Whelan giving Alcaraz a piece of his mind. “I play your bloody wages young man…” or words to that effect…

What happened to the committed, no nonsense, exemplary centre half? Say what you like about Matt Jackson and Arjan De Zeeuws’ lack of pace or technical ability, but a player like those two is exactly what the club needs right now. Anyone whose immediate reaction to that is ‘what about Caldwell?’ really needs to look in the mirror and maybe have a lie down.

I need to stop writing these kind of negative articles, they get rather depressing. Unfortunately though, that’s the situation we’re in. No article I could write about Wigan Athletic right now could be particularly pleasant, that would be like singing and dancing at a funeral.

Speaking of funerals, I think that’s the only thing that will eventually force Sir Alex to retire as Man Utd manager: his own funeral.

I, like many others across the country, am not a lover of Manchester United and in fact even enjoyed watching them get smashed 6-1 by Man City the other week very much. It gave me a similar satisfaction to what I imagine seeing a paedophile or mass murderer savagely beaten up and tortured.

Inappropriate analogy? Maybe, but Cockney Latic isn’t the BBC and I’m sure Jayt won’t have his inbox invaded by a number of strongly worded complaints.

Anyway, despite my dislike for Man Utd which is rather passionate as it seems, I have to respect the achievements of Sir Alex Ferguson, a true great whose glories may never be repeated again.

25 years to spend at one club is fascinating in a cut throat society like today’s. Now it almost seems alien for a manager to last 25 months, and some have even lasted less than 25 minutes (see Leroy Rosenior, Torquay manager 17th May 2007).

Fergie’s success story has gone to show just what a bit of persistence can do for a club; it seems rather typical and repetitive to bring this back to Martinez, and I’m not suggesting he’ll match Fergie’s achievements, but the moral of the story is still valid. Even Sir Alex himself was under threat at one point and had his doubters, it seems Wigan need a Mark Robins to step up to the plate and turn things around like he did for Fergie back in 1990.

It would take a brave man to replace Ferguson at Old Trafford, and many have suggested a young, Spanish manager who encourages an attractive, short passing style of play…

Despite his team’s poor form, the description makes it clear that Bobby is the leading candidate. If Martinez were to join United, it would at least keep the darkside happy for a while?

False alarm: I’ve just realised it was Guardiola people are tipping to succeed Sir Alex, not Martinez. My mistake, but you can see how easy it is to get them confused.

De Zeeuw of the Weekend: Despite being five points off the leaders and scraping a 1-0 win at home to Sunderland, Sir Alex Ferguson deserves a special mention for his 25 years of brilliance, he’ll be ever so proud of this award I’m sure, as endorsed by a Latics legend.

De Ridder of the Weekend: Antolin Alcaraz takes some beating this week, what was he thinking?

Quote of the Week: Edin Dzeko provides hope for Latics fans: “I must say, they (QPR) are the best team we’ve played against this season.” We beat QPR, therefore we’re actually the best team Man City have faced this season. No?

Boselli Watch: Wigan’s record signing was in the news again this week, never one to be outdone, Boselli saw Tevez’s refusal to come off the bench as a joke and went one better. He refused to even sit on the bench at all and is now rotting in the reserves after being fined two weeks wages (which equals to four alice bands and a portrait of Che Guevara).