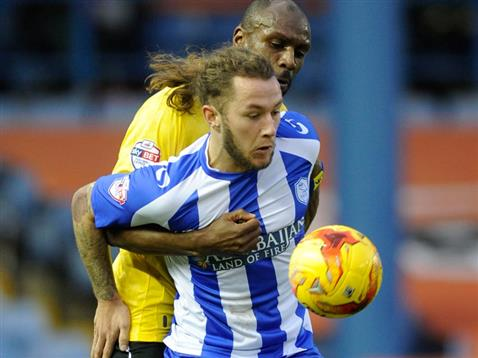 A Stevie May brace gave Sheffield Wednesday their first win in 11 games and Malky Mackay’s first defeat as Latics Boss.

Chris McCann’s header gave Wigan the lead before Stevie May’s finish leveled up 2 minutes later. May was on the score sheet again when his header was adjudged to have crossed the line to snatch the hosts all 3 points.

Jose Semedo had the first chance of the afternoon when his low drive smacked against the foot of Scott Carson’s post after a tidy lay-off from Stevie May. However it was Wigan who opened the scoring; James McClean’s inswinging corner was met by Chris McCann with a powerful header that flew past Owls’ keeper Kieren Westwood.

Malky Mackay’s team’s winning position was short lived as the hosts were back on level terms just 2 minutes after going behind. Atdhe Nuhiu who proved a headache all afternoon for the Wigan back-line cleverly found Stevie May with a backheel after after beating Leon Barnett in an aerial duel. May was left in acres of space after Nuhiu drew Ivan Ramis, Leon Barnett and Andrew Taylor to leave May with all the time in the world to take a touch and calmly finish past Scott Carson.

Jérémy Hélan should have put the hosts ahead soon after. Former Real Madrid and Everton man Royston Drenthe fed a well timed ball in behind Emmerson Boyce which Hélan raced onto but his first touch let him down allowing Scott Carson to make himself big and smother the former Man City midfielder’s shot.

Wigan nearly went ahead 8 minutes after the break when his header was cleared off the line by Liam Palmer. The former Sunderland man got on the end of Emmerson Boyce’s knockdown after skipper rose high at the back post to meet Ben Watson’s corner. Liam Palmer deflected away for Westwood to gobble up and clear the danger.

McCann nearly scored his second of the afternoon, he directed Callum McManaman’s cross wide of the goal before Stevie May swung the tie in the hosts’ favour.

The summer signing from St. Johnstone diverted Chris Maguire’s teasing cross goalbound where his effort hit both posts and was adjudged to have crossed the line before Andrew Taylor hacked it clear to give the hosts a priceless lead twenty minutes from time.

James McClean could have snatched a point for the visitors but his effort was cleared away by Liam Palmer after racing away from the Wednesday back line.

The result leaves Wigan in the bottom three, two points from safety with a very winnable home fixture against Norwich City to come next week.