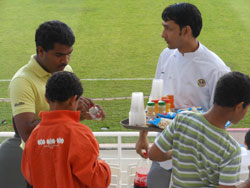 As more and more Middle Eastern money floods the Premier League, you would have thought that there would be a thriving wealth of football talent in Dubai and Abu Dhabi. It is a long way from Wigan Athletic in more ways than one, but there are similarities with Latics as well in the rich oil nations.

Sheikh Mansour bin Zayed Al Nahyan from the UAE owns Manchester City. Asamoah Gyan is now plying his trade over there, Diego Maradona manages one of the league teams. It appears that football’s future lies in the United Arab Emirates. Or does it? I’ve just come back from two weeks out there, during which I took in a couple of league matches. It’s not quite the boom it may appear.

The Etisalat Pro-league was originally set up in 1973, taking its current sponsorship and professionalism 4 years ago. The league consists of 12 teams, mainly based in Abu Dhabi and Dubai. Over the last two years Al Wahda and Al Jazira have been the champions, and they by chance were the teams I went to see.

Al Wahda play in a stadium holding just 12,000 supporters, which is dominated along the open side by pictures of three of the Sheikhs. The Emirati truly love their rulers; not surprisingly perhaps as they have used the oil money to build a better society for the populace.

The first surprise was the cost of admission to football in the UAE. It’s free. That’s right, you just walk up and walk in (after the usual police frisk search that appears world-wide). But even so, even with free admission the Emirati show a great Wigan-like tendency. The attendance for the game I went to, against Dubai SC, was 822.

Obviously there’s no alcohol on sale, but if you want a soft drink or a bite to eat a guy with a tray comes round to the seats selling them. A very weird experience.

But as for the football? Well, I’m afraid they have a long way to go. Fair enough Dubai are bottom of the league and Al Wahda mid-table, but the standard was poor. Al Wahda had a couple of Brazilians, Magrao and Baiano, and an Oman international team-mate of Ali Al-Habsi, Mohammed Albalushi, but the local Emirati players were of a poor level. There was little structure to the play, and at times the game appeared like a schoolyard kick-about with players chasing after the ball.

For the second game we went to see Al Jazira – a bigger stadium holding 42,000. Al Jazira (“The Pride of Abu Dhabi”) are currently top of the league, and not coincidentally are also owned by Sheikh Mansour. The game against Emirates attracted a bigger crowd of 5,936, and this is below their average this season of about 10,000. The Emirates supporters formed a lonely small group in the stand behind the goal, although they did make a good racket with a collection of drums and loudspeakers. The home side support was boosted by bus-loads of migrant workers, mostly Indian or Bangledeshi, bussed in from the camps where they live. The UAE is a very socially structured society, with a clear ranking system. We were in the opposite stand with the Emirati Arabs. I pass no judgement on this, just observe the facts.

Lucas Neill is captain of the home team, and displayed better skills again than the local players. Emirates, another team struggling at the bottom of the table shocked the home crowd with a goal in the first minute, but Al Jazira finished the game easy 4-1 winners. Al Jazira were the best team I saw, but still nothing to write home about (well, I am doing, but you know what I mean). They had more tactical awareness, but individual skills were sadly lacking on both sides and some of the shooting had us laughing out loud – imagine Pat Gavin on an off-day.

The problem appears to be that UAE FA hasn’t really decided what it wants. It has a long-term vision which is admirable, and they have learnt from the Premier League how wholesale import of foreign players can hinder development at grass-roots level. So they impose a limit of 4 foreigners in each squad, of whom only 3 can be on the pitch at any time. What this means though is that the foreigners attracted are those who have been bench-warmers in their own countries, or are past their sell-by date. They have no great incentive to play their hearts out, as the rest of the squad aren’t really up to it. So we have an impasse.

Maybe the answer would be to allow more foreigners in during the early years, and slowly reduce the numbers as the local players develop the skills to compete. Luckily for them there are no equivalents to EU labour laws limiting what can and can’t be done. They can employ as many or as few foreigners as they wish.

Better coaches are needed too. Maradona is of course high profile, but I’d question how good a coach he is. Al Wahda are coached by Josef Hickersberger from Austria, and Al Jazira by Franky Vercauteren from Belgium. Not exactly names to set the world alight.

I think it will be a little while till the UAE starts threatening the world of football at international level, but as a country they are developing very quickly, and maybe we will see more players and coaches from the Premier League moving over there. Charlie N’zogbia would be right at home. Shine for a while, take the money, lose interest, and then move on. It will be interesting to see if the game does develop further.

At least there’s no chance of games being snowed off.