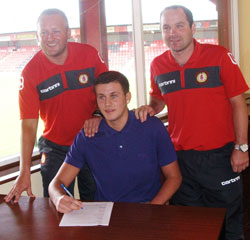 A Wigan teenager has been snapped up by Crewe Alexandra this week, is this one that Wigan Athletic has missed or will they be monitoring his progress there?

Former pupil of St John Fisher High school, Wigan, Robbie Johnson has put pen to paper and signed a 2 year scholarship with N-Power League Division 1 side Crewe Alexander FC, which will see him play for their renowned academy team under the watchful eye of Director of Football Dario Gradi.

A number of clubs had chased the young Goalkeepers signature, but the opportunity for him to work at what is considered to be probably the best youth development club in the country, and being able to work under tutorship of coaches such as Dario Gradi persuaded him that his future lay at the Cheshire club, and with the chance to play opposition of the calibre of Manchester United, Liverpool and Chelsea every week it is an opportunity not to miss, if he wants to fulfil his footballing ambitions.

Robbie a former member of the Wigan Athletic centre of excellence was unfortunately released from the Premiership club back in October last year but when he was offered the opportunity to play for Northwest Counties Premiere league side Ashton Athletic and their Youth Development teams he jumped at the chance.

Under the Management of Dave Powell (Under 17s Manager) and Tony McKenna (Under 18s Manager) in the Northwest Youth Alliance team he continued to train and play at a high standard, where he helped the club to 2 cups and a non-league youth Title. Pictured with Robbie are Crewe Youth team coaches Neil Critchley and James Collins.