Be in the ground for last 5 home games

Wigan Athletic restart their season on Saturday 20th June at Huddersfield, with our first home game a week later against Blackburn Rovers.

Football has to be played behind closed doors and the club is doing all it can to get fans to be involved.

The latest of which is for you to have your face on a cutout, which will be sat in the East Stand for all the remaining home games.

At the end of the season the cutout will be yours to keep, so a great memento to remember this unprecedented season.

The full information and links from the official site:

As football experiences go, the return of the 2019-20 Sky Bet Championship season is going to be unique!

You might not be able to take to your seat in person, but thanks to Fans From Home, you will be able to get in on the action with a cut out of your face taking centre stage at the DW Stadium.

Priced at £20 and available for collection once the season is completed, you can now take a photo or upload an image to Fans From Home to reserve a spot inside the stadium when our home matches resume on Saturday 27 June against Blackburn Rovers, with your cut out remaining in place for all of our home fixtures, including clashes with Stoke City, Queens Park Rangers, Hull City and Fulham, all of which will be broadcast on Latics TV to thousands of supporters watching at home.

It’s important to order at the earliest opportunity because the quicker you upload your image, the better spot you’ll get in the stadium, starting in the middle of the East Stand.

There is a deadline for each fixture and all orders placed 72 hours before each match will be fulfilled, for example, you’ll need to order by 3.00pm on Wednesday 24 June for the first home game against Blackburn.

So if you just can’t bear missing out on a slice of the action, our Fans From Home cut outs are for you! 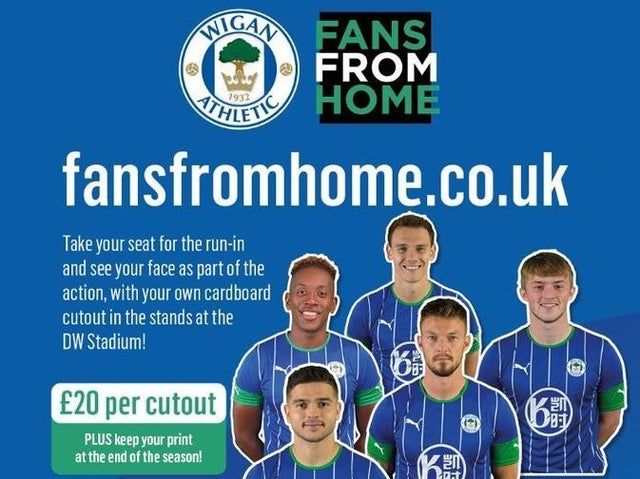