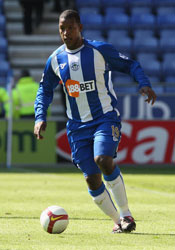 Wigan look set to lose the services of fans favourite Titus Bramble after it emerged that Sunderland have agreed a fee for the 28-year-old defender.

Reports suggest that Bramble is due to undergo a medical at the Stadium of Light before putting pen to paper twelve months after signing an extension to his contract at Wigan as newly appointed Sunderland manager Steve Bruce returned to raid players from the club he had just left.

Bramble joined Wigan three years ago with Chris Hutchings making the former England U21 international one of his first pieces of business following his appointment as manager, snapping him up on a free from Newcastle United.

However, Bramble didn’t have long to become accustomed to his new gaffer as Dave Whelan showed Hutchings the door after a string of poor results which saw Latics win only two from thirteen outings and in stepped Steve Bruce.

It was under Bruce that Bramble refound the form that had made the late Sir Bobby Robson such an admirer with the former England manager raiding his old club Ipswich Town to take him to to Newcastle for a sum of £5 million in the summer of 2002.

Titus made himself a firm favourite with the Wigan Athletic faithful and swept the board at the 2008-2009 Player of the Year Awards.

He has made 104 appearances for Wigan during his three seasons at the club and managed to find the back of the net on five occasions.

His last appearance came in the 3-2 defeat against West Ham at Upton Park with his season brought to a premature end due to a stress fracture to the foot.