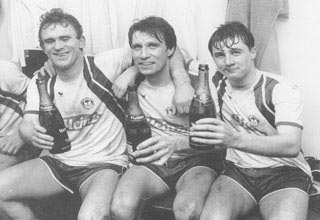 Bobby Campbell was loved by all that supported Wigan Athletic for a short spell between 1986 and 1988, he has died aged 60.

I have been lucky enough to have seen him quite a few times since he left Wigan 30 years ago.  The Supporters Club use any do as an excuse to get the likes of him, Roy Tunks, Colin Methven, Eamonn O’Keefe, Tony Kelly and many more characters back over to see us.

The most recent was in March when he came over to help us celebrate Alex Cribley’s career. He was as funny as ever and always had stories to tell about his time at Wigan.

I remember him being one of those players that took no prisoners and he knew where the goal was. He also was one of those rare players that could go out on the lash the night before a game, but still manage to get on the score sheet.

He was a one off and I am sure you will all have your memories of him, we at Cockney Latic wish the deepest condolences to the family.

On the official Site, Ray Mathias said: “I really am so saddened by the news, Bobby was an absolute one-off and definitely the best £20,000 I ever spent. David Hamilton was my first signing at the club, but Bobby followed soon afterwards and what a bargain he proved to be.

“People talk about what he was like off the field and it’s probably all true and more. He was an incredible character, not a day would go by without some kind of incident involving him. But you had to love him for it.

“I remember one Monday morning all the lads came in with their clean kit, which we washed at home in those days. Sure enough within a few minutes Bobby had wrestled three or four lads to the floor and covered them in mud. They got him back, though, he gave it but he could take it in return, that was Bobby.

“As for his antics of a night-time, you had to turn a blind eye really, otherwise you’d never sleep.  He was always there the next morning at training though, fit and ready to play. And when it came to Christmas time and the party for the junior fans, Bobby was the one to put on the Santa beard and dish out the presents. For all his ways, he was such a likeable guy.

“On the field, however, it was a different story. He was fearsome, a real competitor, maybe his best years as a player had been in previous seasons but any fears I might have had that he was coming to take it easy were dispelled soon enough. He gave everything and scored some great goals.

“I think his best moment came against Doncaster Rovers when there was a race to reach a long through ball. He wasn’t the quickest, but through sheer force and determination he got in front of the centre-half and unleashed a dipping volley that gave the keeper no chance – that’s why we loved him, he was a character but he was also very talented.

“He was great with the younger players around him too, and Paul Jewell will tell you how good he was for him and how he enabled him to have the freedom in the box to score some crucial goals.

“We got to the FA Cup Quarter finals in 1987, losing to Leeds United, but beating Norwich and Hull along the way and Bobby was such an integral part of that side. We didn’t get to Wembley that season, but we did the season after in the Mercantile Credit tournament and I remember Bobby was so devastated when he missed a penalty that day – I think it was against Sheffield Wednesday – that he didn’t say a word to anyone afterwards and just disappeared out of the dressing room, we only saw him back in Wigan when he reported for training with a big smile on his face.

“It’s a really sad day because Bobby is one of those people that no one will ever forget, whether you knew him as a friend, a colleague or as a supporter.”

He will be sadly missed by all at Wigan.