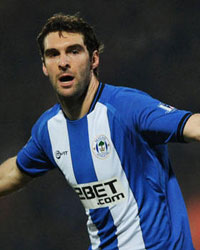 Wigan have agreed a deal for Mauro Boselli to join Mexican side Club Leon for an undisclosed fee.

Boselli joined Wigan from Estudiantes in 2010 for a club record fee of £6 million but never really settled into life in the Premier League.

In his three years at the club he made just 24 appearances with the last of those coming against Sunderland at the DW Stadium back in January as a 77th minute substitute.

In total he scored 5 times for Wigan, all in cup competition, the last of those coming against Bournemouth where he scored the winning goal in the FA Cup Third Round Replay at Dean Court.

The majority of his time at Wigan was spent out on loan with spells at Genoa, former club Estudiantes and more recently Palermo meaning that fans of Wigan Athletic rarely got to see him in action.