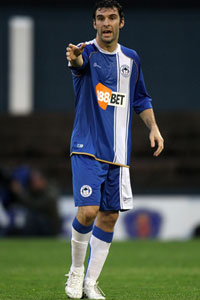 Argentinian frontman Mauro Boselli looks set to rejoin his former club Estudiantes on a season long loan according to the Primera Division club.

26-year-old Boselli, who joined Wigan only last summer from Estudianted for a fee believed to be around £6.5 million, struggled to adapt to life in the Premier League after making his full debut against Blackpool on the opening day of last season.

He had impressed during pre-season and it had been hoped that he would add something to Roberto Martinez’ side that had been missing for a few seasons – a ten plus a season goalscorer.

However Boselli only managed to find the net once in the Carling Cup against Swansea City in October and quickly found himself resigned to the bench before being loaned out to Italian club Genoa during the January transfer window after making only 8 Premier League appearances for Wigan.

The former Boca Juniors trainee had joined his team mates over in Sweden for the first leg of their training camp and had even bagged himself a goal in a friendly against Ostersunds to add to the brace he managed in the same tie almost exactly twelve months ago.

However it appears that whilst he was training again with Wigan his agent was negotiating with his old club for a return to South American and it appears that Martinez is happy for this to happen.

Boselli will travel over to Argentina to reunite with manager Miguel Russo and his side in the next few days ahead of the new season.