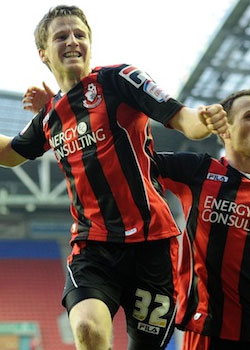 Wigan play host to Eddie Howe’s Bournemouth side hoping to continue with their unbeaten run.

Bournemouth’s last visit to the DW Stadium saw Eddie Howe’s side earn a replay in the FA Cup Third Round almost 12 months to the day.

Jordi Gomez spared Wigan’s blushes as he cancelled out Eunan O’Kane’s first half opener at the second attempt after Cherries keeper Shwan Jalal had saved his spot kick.

Mauro Boselli settled the tie at Dean Court to send Wigan through to Round Four and, as they say, the rest is history.

Latics now compete with Eddie Howe’s as equals and that was no more apparent when the two sides squared up at the beginning of the season on the Dorset coast.

Owen Coyle’s side arrived at a wet Dean Court following on from an emphatic win at Barnsley and another trip to Wembley Stadium.

However, despite losing to Manchester United in the Community Shield the previous weekend Wigan went into the game in optimistic mood but that all came undone either side of the half time break.

Lewis Grabban put the home side in front in the 43rd minute before the Cherries were awarded and missed the chance to double their advantage from the spot with Brett Pitman missing a penalty 10 minutes after the break.

That would have put Wigan well and truly on the back foot but thanks to Scott Carson they were still in the game – until a few minutes later that was.

A rash challenge by Callum McManaman on Pitman in front of the dug out reducing Wigan down to 10 men with the referee giving the Latics winger a straight red for his troubles.

Uwe Rosler will be hoping his lads can make amends for that defeat and continue with their unbeaten run in domestic competition since his appointment.

Three points at the DW for Wigan would further help them keep up with the promotion hopefuls and with a game in hand on their rivals would place them on a decent footing as the season enters the second half.

Bournemouth go into the game in encouraging form with only one defeat from their last six outings in the league coming off the back of only one win in eleven.

They currently sit 16th in the Championship, five places behind Wigan but only three points adrift. However their goal difference isn’t exactly something to shout home about.Bournemouth have leaked 41 goals in the league so far this season with 26 of those conceded on their travels, only Millwall boast a worse record.

However they have not lost on their travels since a 3-0 defeat at title chasing QPR at the beginning of December.

Wins at Reading, Sheffield Wednesday and a draw on New Year’s Day at Brighton have help keep them in touch with the chasing pack.

Despite that Wigan will be going into the game confident of a win.

Uwe Rosler has long term absentees Shaun Maloney and Gary Caldwell still unavailable but the two Scots are both in training on their road to recovery.

Nick Powell could return to the starting line up after being rested because of a tight hamstring for the FA Cup tie against MK Dons last time out.

Recent arrival Tyias Browning could also feature on the bench for Wigan after joining on loan from Everton.

Summer signing Mohamed Coulibaly is reportedly nearing full fitness after missing out since the end of September with Achilles and calf problems but this weekend’s game may be a bit too early for return for the Swiss forward.

Defender Steve Cook could make a comeback to the side after the 22-year-old missed out over Christmas due do a torn hamstring.