Bournemouth – the man in the middle on Saturday 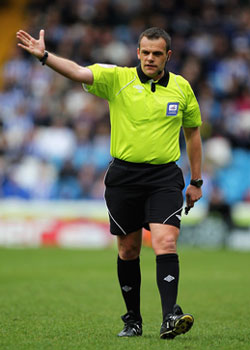 Let’s take a look at the man given the task of keeping things in check during this weekend’s Sky Bet Championship game at the DW Stadium against Eddie Howe’s Bournemouth.

Geoff Eltringham has been appointed to officiate over this weekend’s game between Wigan and Bournemouth.

A mad keen Sunderland fan and former season ticket holder he started out refereeing in the local Sunday Leagues after completing a course at the suggestion of a former school teacher.

He quickly progressed through the Russell Foster Tyne and Wear Youth League, Northern and UniBond Leagues and then the Blue Square North and Blue Square Premier.

In 2008, he was appointed as an assistant on to The Football League List but only a year later was promoted to referee with his first game in the middle coming at Morecambe in a League Two game with Hereford.

He generally officiated League One and Two games for his first two seasons on the Football League list with the odd Championship game coming under his scrutiny but since the 2011/12 campaign he has been more involved with games in the second tier.

The Tyne and Wear referee took charge of Latics’ first game back in the Championship at Barnsley back in August where Owen Coyle’s side stormed to a 4-0 win.

He booked James McCarthy just before the interval that afternoon and Barnsley’s Martin Cranie midway through the second half with a red card sandwiched inbetween for Dale Jennings thanks to a wreckless challenge on McCarthy – only minutes after the former Bayern Munich midfielder had been introduced to the game as a substitute.

He also was in charge of Wigan’s Capital One Cup Second Round tie at Nottingham Forest last season where Latics also netted four times but saw themselves down to ten men following Antolin Alcarez’ dismissal for a second yellow in the 78th minute.

Eltringham was also fourth official at the Premier League games at the DW Stadium as Wigan beat Norwich City 1-0 in March last year, October 2012 in the 2-1 win over West Ham United and February 2012 for the goalless draw with Aston Villa.

The 34-year-old has handed out a total of 60 yellow cards and 4 reds in the 16 games he has been in charge of so far this season.