Bournemouth – they played for both sides 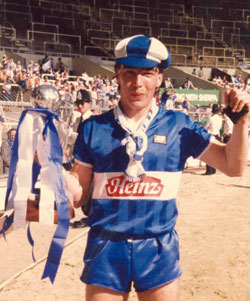 A quick look at players who have turned out for both Wigan Athletic and this weekend’s opponents Bournemouth.

Wigan born Warren Aspinall started out as an apprentice at 13-years-old with Wigan and made his full debut for the club on 2nd March 1985 in a 1-1 at Orient’s Brisbane Road.

He quickly settled in and formed a formidable partnership up front with Mike Newell and the following season Aspinall found the back of the net on a regular basis.

His goalscoring talents had alerted a number of top sides and in February 1986 Aspinall was sold to Everton for a fee of £150,000 but was immediately loaned back to Wigan until the end of the season.

He finished the season as Latics’ top goalscorer with 27 goals in all competition including a hat-trick on the final afternoon of the campaign in a 5-3 win over Wolverhampton Wanderers – a result that confirmed the West Midlands side’s relegation to the bottom tier.

Regular football at Goodison for the teenager proved difficult to come by and following only 10 substitute appearances and a year after signing for Everton he joined Aston Villa for £300,000.

Portsmouth forked out £315,000 for his services in August 1988 and towards the end of almost 5½ years at Fratton Park he spent time on loan at Bournemouth, making 6 appearances and scoring once, and then Swansea City.

At the end of December 1993 Bournemouth took him back to Dean Court, this time on a permanent basis, for a fee of £20,000 where he remained for 18 months making 33 appearances and scoring 8 goals.

He left Bournemouth to join Carlisle United on a free transfer at the end of the 1994/95 season and went onto play for Brentford, Colchester and Brighton before retiring from professional football through injury in November 2000.

Following his retirement problems with alcohol, gambling and depression almost took him to the brink of suicide but a spell in the Sporting Chance clinic seems to have turned his life back around.

Apparently currently works at a Sainsbury’s warehouse in Basingstoke.

Joe Parkinson joined Wigan on a YTS scheme and following some impressive performances in the reserves was awarded with a place in the first team with his debut coming as a substitute for Mark Hilditch in a 2-1 win over Blackpool on 30th September 1988.

His next appearance, and his full debut also saw him score his first ever goal in a 1-0 win over Mansfield Town at Field Mill on 14th January 1989.

He made a total of 14 appearances in his first season, 4 from the bench but it was the following year where his career really kicked off and firmly established himself in Wigan’s first team squad.

He made a total of 147 league and cup appearances for Wigan and found the net 9 times before he joined Bournemouth for a fee of £35,000 following Wigan’s relegation from Division Three to Divsion Three.

His time at Dean Court was relatively short lived but the Eccles born defender had caught the attentions of a number of bigger clubs and on transfer deadline day in March 1994 Parkinson joined managerless Everton for an initial fee of £250,000, eventually rising to £800,000, after making 39 appearances and scoring twice for The Cherries.

He made 107 appearances for the Merseyside club scoring 4 goals and won an FA Cup winners medal with the club in 1995 after they defeated Manchester United at Wembley.

He struggled with injury towards the end of his career and his last professional appearance came in the Premiership in a 1-1 draw at Goodison Park against Leicester City on 9th April 1997 but his left knee wasn’t really up to it and he was replaced at half time by Denmark international Claus Thomsen.

He was ruled out for the rest of the season and then missed out the completely the next two seasons as he battled to save his career.

He was eventually forced to retire through injury aged only 28 in November 1998.

Currently employed by Wigan Joe works as assistant to Head of Youth Coaching and his former team mate John Doolan.

Nigerian international David Adekola joined Bournemouth at the end of September 1994 on a free transfer from Bury but couldn’t settle on the south coast and after only two weeks with the club and only one appearance from the bench he returned to the North West and joined Wigan.

He made his debut on 22nd October 1994 as a replacement for Matty Carragher in a 1-1 draw at Northampton Town and made 4 further appearances, one of those coming in the FA Cup against Spennymore United at Springfield Park.

His only start for Wigan came in the 3-3 Boxing Day draw against his previous club Bury at Gigg Lane where he was eventually replaced by Paul Tait never to pull on a Wigan shirt again.

He was released by the club a few weeks later and joined Hereford United on a free transfer.

Rob Newman joined Wigan from Norwich City on transfer deadline day in March 1998 on loan until the end of the season and teamed up once more with John Deehan, his former manager at Carrow Road.

He made his debut in a 1-1 draw at Preston and went on to make eight appearances in total for Latics as they finished mid-table in Division Two.

In October 2006 Newman was named as assistant manager to Kevin Bond at Dean Court and turned out for the reserves from time to time.

On six occasions during the 2007/08 season he was seen making the numbers up on the subs bench and even came off it once as a 87th minute substitute in a 1-0 win at Bristol Rovers’ Memorial Stadium in a Johnstone’s Paint Trophy tie – 5½ years after his last outing as a Southend United player.

Bond and Newman were sacked by Bournemouth at the beginning of September 2008 following relegation and a poor start to the current campaign.

The following month Newman returned to Wigan as part Steve Bruce’s scouting network and is currently head of scouting at Manchester City.