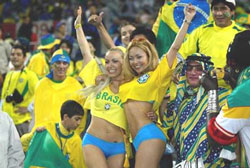 I was lucky enough to be at the Brazil v Scotland game at the Emirates Stadium the other weekend, and as expected, it was superb occasion.

After some excellent hospitality laid on by Arsenal where I rubbed shoulders with a couple of Z-list celebrities, barely recognisable and long forgotten Scottish footballers, and a countless array of people desperately clinging to the back of the Kentaro gravy train.

I then watched Brazil play little more than a training match against players most of them have probably never even heard of. It ended with the inevitable Brazilian victory, all played in front of a lively crowd split about fifty-fifty between Scots and Brazilians – or at least that’s how it must have looked on TV.

One of the first groups of Brazilian supporters I saw on reaching the Emirates consisted of several women of the ‘well fed’ variety, and whenever I have seen photographs of female Brazilian football fans, then tend not to look at all like this.

Despite all of them wearing the famous yellow shirt, scarves, and face paint, it didn’t disguise the fact that clearly none of them had seen any sun for quite a while (Magaluf 2008?). One of them had a tattoo on her upper arm which was ornate calligraphy of the word ‘Nan’, however, the biggest giveaway was that they sounded like they all came from deepest, darkest West Bromwich.

Call me cynical, but I’ve heard Pele talk on TV and not once have I heard him utter the word ‘yam’, or the phrase ‘ta-ra a bit bab’. Black County and Brazilian-Portuguese are not similar and indeed I suspected these Santos stunners might have been less Porto Alegre and more Dudley Port.

Now, I wondered if these ladies had stumbled upon this event in error, confusing the Brazilian reference on posters for something completely different, and dare I say it, considerably less attractive to watch, however I soon noticed they weren’t alone. Seemingly, at least half the Brazilian supporters there, and it was a fair old turnout I must say, were definitely not Brazilian.

There were Irish accents, Asians, Cockneys, Brummies, Germans, Japanese, and the list goes on. I even saw a ginger bloke in glasses wearing the full Brazil regalia. Most things I can accept, but not the notion that there are ginger bespectacled Brazilians strutting down the Copacabana in a thong.

But all this got me thinking ‘why?’. Why on earth would you go and support someone else’s country? What motivates you to support a people and culture for which you have no connection, and quite possibly no understanding?

I’d say there were thousands of people there who have never even met a Brazilian before, let alone been to the country, and I’d hazard a guess that there would a fair chunk of the Brazilian section who couldn’t even point to the place on a map.

On reflection, I’ve come to the conclusion that it speaks volumes on what today’s football world has become. In the same way that Google Earth and Street View allow you to walk down Sunset Boulevard or the Champs Elysees from your living room whilst wearing just your underpants, football matches have become cyber library books whereby anyone can log on or press the Sky Sports button, browse, take a bit of Man U v Chelsea, or Barca v Real, and then throw it back when they’ve got bored with it. In today’s world, you can pick and choose which game you watch, and if it all gets a bit unsightly, turn the thing off and find another one, and buy the replica shirt to match.

It’s why public school boys from St Albans support Man U and think they have a connection with a lad who’s living with his three kids in a council house in Stretford. It’s also why you have the infuriating certainty that when the presenters on radio station phone-ins declare ‘The next caller is Steve who’s a Liverpool fan’; you know he’s going to finish that sentence with ‘from Norwich’.

United, Arsenal, Brazil, or Barca – it depends who’s winning at the time, and who takes up most TV air time. Gone are the days when a football team represented the communities in which they spawned.

Brazil, I’m afraid, eclipse all, and have become a travelling circus, who play ‘home’ games in England and Qatar. It isn’t the Brazil that used to intimidate opponents in front a hundred thousand South Americans at the Maracana.

They now play in front of crowds made up of girls from West Bromwich and ginger blokes in shirts bought from JJB. The samba beat that now forms musical accompaniments to all their games isn’t from the back streets of Rio or Recife; it’s now played by community drum bands from places like Redditch or Richmond.

The selling-out of Brazil is a global football scandal, and is indicative of what will happen to the sport if the TV people get free reign. Did I say at the start of this piece that Brazil v Scotland was a superb occasion? If so, I take that back.

Having thought carefully about it now, if I was from Brazil, I think I’d stop watching them out of protest. I’d probably start watching Argentina because I’ve seen them on the telly a few times and they look a half decent team. Their shirts are nice too.