Can Latics beat Tranmere and progress?

Win and we are through

I suppose the question is whether the team’s confidence can take many more defeats? Although playing more game seems to be the last thing we need, you can switch that round to wanting the team to get more pitch minutes together to learn about each and get up to speed.

Injuries are really hampering us right now and with us being on the limit for the number of playing personnel we can have under administration, this isn’t going change anytime soon.

We look to be marginally favourites to win the game, though it is marginal. If you want to take advantage of the Paddy Power Promo Code – 100% Verified, you could be looking at 6/4 for us to win and move on to the next round.

We could have secured our place by beating Port Vale a couple of weeks ago, but a bad night saw us lose out 3-1 at the DW Stadium. But beating Rovers would secure a place in the next bout of the competition and lift heads along the way. 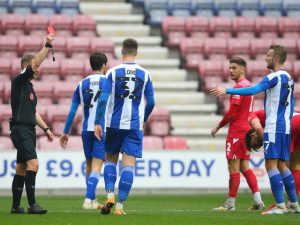 Tranmere are a League below us and languishing in the bottom half too. We are on a really bad run of form and results, sitting bottom of the league and now out of the FA Cup after non-League Chorley and the referee beat us in extra time.

We don’t have another game after the EFL Trophy game at Prenton Park for 11 days, so hopefully we can go out and give it our all to try and get some much needed confidence to take into the next few league games.

What is happening (or not happening) off the pitch of course, is probably affecting the performances, no-one knows where they are. As soon as a decision is made on the Spanish bid, the sooner we will have more stability.

If the Spanish bid isn’t going to happen, we need to know quickly so we can move on to the next set of bidders. The silence is deafening from within the club and the EFL, so from experience I am guessing there are serious reservations and therefore a big possibility we could be looking on from the Spanish.

We need our future sorting so we can start to look at building a new team, get the experience in that is glaringly needed to bring these youngsters along.

Injuries have hit the experienced players and so the core of the team is little green at the moment. Hopefully the break due to AFC Wimbledon’s COVID issues, could have arrived at a time where we can really work on getting these players fit again.

All irrelevant for the Tranmere game, where the available players will just have to muck in and get the job done, they are more than capable to lets hope they can deliver. We have over two thirds of our squad originating from our academy set up.

This is a great statistic, but it would be better if they could be eased into the first team rather than being thrown in the deep end. It is a steep learning curve for them and we have to believe that they will grasp it and succeed.

I personally think we will win, we will draw on the Liverpool performance and cause Tranmere too many problems. We really could do with a win and we hope it can be here. The game is on Wednesday 11th November 2020 with a 7pm kick off.