Can Wigan maintain their push for promotion? 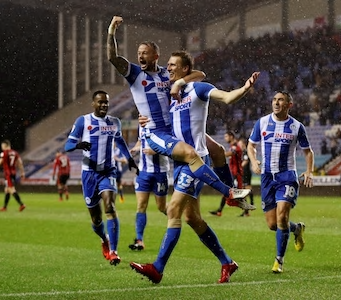 Dropping back into the third tier after just one year in the Championship was a major blow to supporters, who just four years ago were celebrating an FA Cup win.

However, Wigan fans are nothing if not resilient, and this season the players have shown the same sort of never-say-die spirit. Under Paul Cook, they’ve risen to the challenge of life back in the third tier and will be hoping to emulate the likes of Wolverhampton Wanderers, who appear to be heading back to the Premier League just five seasons after dropping into League One.

The biggest danger for a big club at this level is complacency. Underestimating the quality of the opposition in a league that is full of well-organised, ambitious teams attempting to break through to the next level can prove costly. Some of the big names that have fallen into League One – most notably Sheffield United – have found that bouncing back is not a foregone conclusion. Teams at this level are no respecters of reputation and indeed often raise their game against high-profile newcomers such as Wigan.

However, their recent experience of life in League One has served the players well, and under new manager Paul Cook they got off to a solid start, beginning with a hat-trick of victories and closing inexorably on the top of the table. They reached the summit at the end of November, a position they haven’t relinquished since, suffering only one defeat in 12 games, during which time they’ve let in an astonishingly miserly five goals.

While all areas of the team have been functioning well, it is the defence that has been the platform for their promotion push. The Latics have let in 16 goals so far in League One, which makes them the best defensive team in the whole of English football.

At the other end, they’ve capitalised on their water-tight defence with some scintillating forward play. Will Grigg, who has plenty of experience at this level, has been firing on all cylinders, both in the League and the FA Cup, and there have been useful goalscoring contributions from Michael Jacobs and Nick Powell. As a result, in addition to having the best defence in the division, the Latics are the top scorers.

A solid defence and a potent attack make for a pretty deadly combination, and that’s why the bookmakers have consistently rated Wigan as the big favourites in this section. Stakers have the Latics as massive odds-on favourite to win League One, and that’s despite the fact that they currently only have a two-point cushion over Shrewsbury.

At the start of the season, no one was predicting that the Shrews would be challenging for automatic promotion, but they have proven remarkably durable. While they don’t have the attacking options that Cook has at his disposal, they are solid at the back and are showing considerable resilience in hanging on to a top-two spot despite their lack of resources.

Wigan’s other main challenger is more predictable. Blackburn made a slow start to their campaign, but have gradually closed the gap and are now just three points off the Latics, though they’ve played two games more. Rovers can match Wigan for squad depth and could yet prove to be more of a threat than Shrewsbury as the season reaches its climax – all of which makes the 4th March clash at Ewood Park critical to Wigan’s chances.

That game is followed by fixtures against current play-off contenders Scunthorpe and Bradford, both struggling for form but conceivably within range of the automatic promotion places. If Wigan can emerge victorious from that run of fixtures, and if Shrewsbury begin to weaken as the campaign taxes their limited squad, promotion could come quickly.

Is there a weakness that could yet trip up Wigan? There don’t appear to be any deficiencies in terms of football ability, so the biggest risk to the Latics’ promotion push could be a touch of complacency. The defeat at Southend United served as a reminder that no team can be taken for granted in this league. Fortunately, a defeat for Shrewsbury and a draw for Blackburn on the same weekend meant that Wigan’s lead at the top remained intact, but Cook will be able to use that defeat as a warning to his players not to let standards slip in the closing weeks.

Can Wigan maintain their push for promotion? Given their resources and the way they have played so far, it would be astonishing if they didn’t. After a pretty disheartening 2016-17 season, the Latics players have provided the perfect response, and this time there is genuine optimism that promotion from the third tier can be the first step on the road back to the top flight of English football.