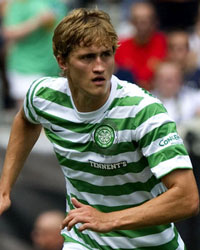 Celtic defender Thomas Rogne is today undergoing a medial at Wigan and is expected to become Owen Coyle’s second signing since taking over at the club.

Rogne is currently out of contract at Celtic after deciding not to take up their offer of a new deal.

The Norway international, who will celebrate his 23rd birthday tomorrow, made just 13 appearances in the league for the SPL champions, 5 of those coming from the bench, believes that he needs to move away from Celtic Park if he is to play regular first team football.

Wigan manager Coyle needs to bring in reinforcements ahead of the new season, especially in defence, with Maynor Figueroa and Roman Golobart having already departed the club and Antolin Alcaraz expected to follow them out of the door shortly.