Charlie says he is going nowhere 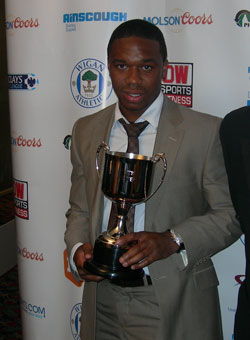 Charles N’Zogbia has stated that he is very happy at Wigan athletic and has no intentions of leaving, the wing ace is currently enjoying a well earned holiday before he returns to throw himself into preseason training.

Roberto Martinez has stepped up to say that as far as he is concerned Charles N’Zogbia will be at Latics next season to improve on the form that earned him the player of the season award for 2009/2010. The gaffer said that we have no interest in selling Charles and he has no interest in signing for anybody else, he is very happy at Wigan.

Latics manager Roberto Martinez has reiterated that the club has absolutely no interest in selling Player of The Year Charles N’Zogbia, who, he says, is very happy at Wigan Athletic.

The comments were made in the wake of media speculation surrounding the player today and over the past few days, and Martinez is adamant that N’Zogbia is committed to Latics.

Martinez said: “My view is that we’ve always said that Charles N’Zogbia is not for sale and that’s not going to change.

“I’ve spoken with Charles and he is very happy at Wigan Athletic.

“That’s what matters and that’s the clear message to our fans, we’re not here to try and sell our best performers, we want to keep them, develop them and help them reach the next level, and Charles feels he can do that at Wigan Athletic.

“It’s for everyone to see the huge development of Charlie’s game over the last season. He’s enjoyed his football and his role at Wigan Athletic and we want that to continue for next season.

“Charlie has got the potential to play at the highest level in World football but he knows he can still continue to progress towards that goal at this club.

“I’m just happy that Charles is enjoying his holidays and getting himself focused to coming back next season ready to carry on the good work he’s done over the last 12 months.”

“We are not in a position where we have to sell and if and when we do it will be only in the club’s best interests and after we have identified two or three potential replacements for that position.