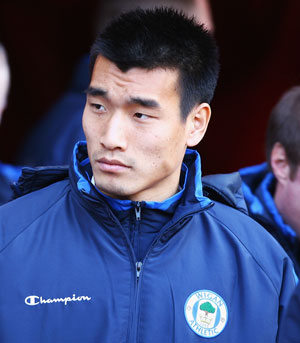 Latics’ South Korean International Won Hee Cho has been released from his contract over a lack of being able to get a new visa, here is the club statement.

Wigan Athletic can confirm that South Korean international midfielder Won Hee Cho’s contract with the club has been cancelled by mutual consent.

It marks the end of a near two year association with Latics, following his arrival from South Korean club Suwon Bluewings in March 2009.

After making only five league appearances for the club, he has just spent a year on loan back at his old club.

However due to his lack of international appearances in this period, he no longer qualifies for a UK Visa and has thus been unable to re-enter the UK to finish his contract with Latics.

Roberto Martinez said: “We wish Won Hee all the best in the future, he was a wonderful character and a great professional who always gave his all for us.”