Cockney Latic is back 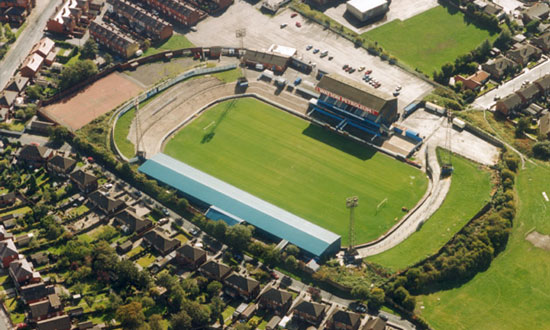 Cockney Latic has been away but hasn’t forgotten the Springfield Park Stand Campaign. Now we are back online we would like to help out in the quest to have a stand named at the DW Stadium in memory of our first home, Springfield Park.

Our friends over at YOTAC have continued the campaign that we were backing before our site went down, and interest and support has grown quickly in just a short number of days. In unison with almost all the other Latics sites on line it will hopefully spread even further on the world wide web courtesy until our quest to get the East Stand renamed as the ‘Springfield Park Stand’ is fulfilled.

The original article read as follows and we urge everybody to make themselves heard to make this proposal a reality:
Springfield Park is, and always will be, the ancestral home of Wigan Athletic. Sadly, the old ground is now a housing estate and as time passes by the roots of this great club are being eroded.

With news that the soon to be tenants of the DW Stadium, the Wigan Warriors, have been allowed to name a stand after one of their Welsh heroes, surely it is only right that the fans of Wigan Athletic, whose club will shortly be the owners of the stadium, see such a dedication to their past?

Unlike fans of the oval ball code though, the supporters of Wigan Athletic feel that it would be unfair to single out any one person and would instead like a stand named after their former home.

Whilst it is all well and good to name a stand after a club legend, as is the case with Billy Boston, who also played for Blackpool Borough and so wasn’t even a ‘one club’ man,, we feel that any stand should be dedicated to something that really does belong to Wigan and the club, and that is SPRINGFIELD PARK.

Wigan Athletic supporters as a whole tend to be a sentimental lot and have their own personal memories of many, many great players and personalities and couldn’t, hand on heart, agree among themselves on any suitable player for a stand to be named after.

This idea, that is spreading like wildfire, would see EVERYBODY who ever stepped foot in Springfield Park honoured from Joseph Howarth, the club’s first chairman to Stuart Barlow who scored the last competitive Latics goal at the venue. And quite right too!

We are all rightly proud of the DW Stadium and the man who built it who almost singlehandedly ensured that the club finally did achieve its greatest dream, that of competing against the very best and holding our own against them.

We are now asking him to make the ultimate gesture of giving the fans this simple wish. Whilst we will be forever grateful for our new home, it is only right that our former home should be represented within it.

Springfield Park, at one time or another, hosted almost every major sport played in the town and that includes rugby league. Not only did Wigan Warriors spend a season there but Latics also bailed Blackpool Borough, Billy Boston’s old club, out of frightful financial trouble by allowing them to spend time at Springfield Park when the Warriors were unwilling to help them.

It was the home of two Football League clubs, and four others, survived a ravaging fire that destroyed the main stand, and then it was rebuilt by some Latics diehards who still support the club to this day.

It was the home of FA Cup giant killing, and when Latics gained Football League status they didn’t forget their roots and allowed non league clubs to continue using the ground for various cup finals.

And who will forget the awful vandalism when the ground closed its doors for good. Up until now those vandals and the bulldozers can claim victory in ensuring that the memory of Springfield Park is fast fading.

But the fans of today’s club, many of whom saw the main stand at Springfield Park rise like a phoenix from the ashes, want with all their hearts, to see Springfield Park itself rise again by being dedicated and remembered forever at the DW Stadium.

We urge all Latics sites and fans to make this an ongoing project until Springfield Park is rightly remembered as the oldest and proudest sporting ground that the town of Wigan ever saw.

Remember this, and make the club aware that the first recorded game at Springfield Park took place on Wednesday 1st September 1897, between Wigan County and Burton Swifts. The first recorded rugby game at Central Park, erroneously thought of as the home of Wigan sport, arrived five years later.

Yet another reason why Springfield Park should receive the honour that we all crave for.

On Saturday just gone (11th July) 5 Latics fans have met up to see what the best course of action is to move this forward and I’m sure sometime soon they’ll let us know how it went.