Although the transfer deadline day only served to remind us Wiganers how unpopular and unglamorous our club is through several reported rejections from targets including John Stones and Aiden McGeady; we did manage to bring an old face back to the DW: Mr Paul Scharner.

In the past, we’ve often been linked with past players such as Jimmy Bullard, Jason Roberts and Nathan Ellington (with bids reportedly being made for the former two). Indeed, the trend has also been true for managers as in November 2007, Paul Jewell was linked with the job he’d left the previous May. Instead, Steve Bruce took the job, another former Wigan Athletic manager of course. Although these rumours tend to be thrown around and discussed by the fans in hope, few of them bear fruition. This Scharner deal is clearly an exception, but is it a good idea? History provides mixed evidence.

Firstly, many of these deals occur from heavy hearts overruling more rational heads. These poignant returns tend to be highly romantic but aren’t always what the team actually needs, but are often a way of uniting the fans in worship for a former hero or galvanising a squad in adverse circumstances. The best example of the former I can recall is in the case of Jurgen Klinsmann’s return to Tottenham in 1998. After a successful first spell in which he became one of Britain’s most loved Germans, Jurgen returned to White Hart Lane to divert Spurs away from relegation trouble with nine goals in fifteen games.

Although the opening of the previous paragraph may suggest these deals for returning heroes shouldn’t work, this isn’t always the case. For instance, Mark Hughes left Man United for Barcelona in 1986 and despite his spell in Spain (and later Germany) proving unsuccessful, this didn’t prevent him from returning to Old Trafford and furthering his cult status in 1988. Similarly, Ian Rush left Liverpool for Juventus in 1987, but swiftly returned in 1988 after saying Italy was “like living in a foreign country.”

More recently, Duncan Ferguson had two equally successful spells at Everton either side of a spell at Newcastle; whilst Juninho Paulista was so popular 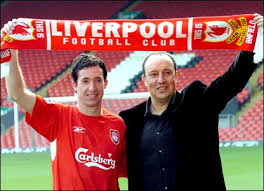 at Middlesbrough that they signed him on three separate occasions. Robbie Fowler’s romantic return to Anfield in 2006 also brought a spring in his step after a dismal spell at Manchester City and troubled times at Leeds. In what is the most romantic return I can recall of recent times, Fowler rolled back the years and the Kop rejoiced in the return of ‘God’, and described his joy at his return by saying “everyday I wake up I feel like a kid on Christmas morning.”

Furthermore, after Harry Redknapp was appointed Tottenham manager in 2008, he went after players Tottenham had sold only recently, with Robbie Keane, Jermain Defoe and Pascal Chimbonda returning to the club they’d only left the previous summer. Whilst Keane never reached the heights of his first spell and Chimbonda proved a misfit; Defoe has flourished and is still Tottenham’s number one front man.

Also, with every game that passes Manchester United fans still chant about Cristiano Ronaldo, such is their love for him. Every United fan I know has expressed how much they’d love to have Ronnie back, and would you bet against it? Although United would struggle to afford him at the minute, I could easily envisage seeing Ronaldo in a United shirt again, especially if Mourinho turns out to be Ferguson’s successor.

So, history hasn’t given a conclusive verdict on Paul Scharner’s return, and neither did his second Latics debut on Saturday. Although it may have been less successful than Paul’s first Wigan debut, the 1-0 Carling Cup semi-final first leg win over Arsenal in 2006 when Scharner bagged the winner, Saturday’s 2-2 draw with Southampton was still fairly exciting.

Although I didn’t watch the game fully, I couldn’t help but notice that Paul was at fault for Southampton’s first goal, with him getting sucked in to the ball and leaving Rickie Lambert free at the back post for a Saints equaliser. He did however provide a valuable assist with a knockdown for Shaun Maloney’s late equaliser so I suppose that cancels it out.

Scharner may have left in acrimonious circumstances, on a free transfer to West Brom after regularly demanding to play in centre midfield and asking for large wages in any potential new deal, but he still remains a favourite with (most of) the fans. I remember he was even quoted in the press as saying we didn’t have enough to stay up last season, indeed, he even scored to deny us a victory in a 1-1 draw with West Brom in March. It would seem that his eccentricity endears him to us despite his incidents that have led to some questioning his fan’s favourite status.

Paul certainly doesn’t look like your typical footballer, and his hobbies of classical music and mountain biking contrast vastly with the prostitutes, camouflaged Bentleys and work experience shooting exploits of tabloid stars. Whether it’s his radical choice of hairstyles, outspoken nature or fur coat that endears him to you, I think it’s fair to say Paul Scharner is a cult hero of our Premier League era. I for one will be delighted if he can help us stay up this season, and he also seems happy to be back after tweeting that he’s “back home at Wigan”.

On the topic of returns, I’d like to finish by mentioning Mario Balotelli. I know he’s been the centre of most football related press recently but let’s be honest, it was impossible for him to leave quietly out the back door, wasn’t it?

After being dramatized beyond recognizable measures as an antagonist by the English media who latched onto every single piece of news in his life, I think it’s great news for all parties that Mario’s decided to return home to Italy. Don’t get me wrong, I thought he was a thoroughly entertaining character, but lay behind the fireworks, flash cars and “Why always me?” t-shirts is a potentially world class footballer, and I don’t think he would ever have realised his potential at Manchester City.

Mario strolled around the pitch effortlessly when he played for City and that didn’t help him. To maximise his potential he must work hard on the pitch and on the training ground and it seems he was struggling to do that. Of course, the English tabloids didn’t help; although he may cut a strong-willed, unfazed demeanour, there must still be a dose of fragility in that 21 year old character of his. The English media may have proved too much of a burden for him and a return to his comfort zone in Italy may just be what he needs to find his magic touch. He’s already started brightly by bagging two goals on his debut in a 2-1 victory over Udinese.

Don’t be surprised to see him return to England as a transformed player in years to come, but it would have been harsh to have expected such a quick development at City. After all, living in England must have been like living in a foreign country for him.