As history has taught us, when we reach April and survival is still to be earned, you cannot pick and choose fixtures that you think you can win and write off the others. At this stage, every game should be treated as a must win scenario.

This is often why, come the end of the season, surprising results appear as clubs are fighting for their lives. We demonstrated this ourselves last season with impressive victories over Liverpool, Man Utd, Arsenal and Newcastle (the latter was much more of an achievement twelve months ago), it’s safe to assume we would have been relegated had we lost all four of those game (as many predicted). Again it appears that Wigan will probably have to win a game or two that they would not normally be expected to. Those who saw Tottenham emphatically beat holding Champions Manchester City 3-1 last week would have feared the worst for Saturday, but Wigan should have achieved one of those wins against Tottenham.

Following a nightmare start in which Joel Robles and Maynor Figueroa fell into the trap of overplaying in their own six yard box, Wigan’s response was admirable. Although a point against Champions League chasing Spurs is a creditable one, Martinez will no doubt be feeling his team deserved a victory.

The game was typical of Wigan’s recent performances. Martinez’s young, energetic team dominated for spells and looked confident in possession, causing Tottenham’s defence countless problems. In keeping with the recent trend, defensive errors undid or outweighed the impressive work going forward. Having made those two points, Latics did at least show a cutting edge up front for a change in scoring two goals, and Martinez’s tactics to nullify Gareth Bale’s threat were superb. The fact his only threatening moment was when the ball unfortunately ricocheted off his ankle and into the net after a casual clearance from Joel demonstrates how well Wigan managed to keep the favourite for PFA Player of the Year quiet. Is it just a coincidence that he usually has a quiet game against us?

Despite the disastrous start, the instant response from Wigan was superb. In a scenario where previous Latics sides may have lost confidence and struggled to regain a hold of the game, Shaun Maloney whipped in a corner and Emmerson Boyce rose highest to head home the equaliser barely 90 seconds after Bale’s opener. This allowed the team to relax and practically restart the game and cancel out the defensive error.

Wigan continued to create chances but couldn’t take the lead until the second half, when Callum McManaman scored a screamer, his first Premier League goal. The most impressive aspect of the goal for me, besides the emphatic left foot finish, was the exquisite first touch which left Kyle Walker flat footed and completely out of the game. From there, Callum had worked a yard in which he could hurt Spurs, and so he did. A compulsory part of a talented attacking player’s array of skills is a great first touch and a clever footballing brain to know how and when to use it. Callum clearly demonstrated both with his goal.

With almost an entire half left to play though, Wigan couldn’t take their lead for granted or hope to defend for the rest of the game and invite pressure. Martinez knew this and encouraged his side to continue attacking in search of a third goal to effectively kill the game. Arouna Kone probably had the best chance for the home side, collecting the ball on the left hand side of the box and embarrassing Michael Dawson by catching him square on with a neat piece of trickery. Although his left footed shot was comfortably saved by Hugo Lloris, the willing running and sharpness of Kone was enough to leave the Tottenham defence a cautious of his threat.

Although Tottenham didn’t look too threatening, it would have been naive to think a side fighting for qualification into Europe’s elite competition wouldn’t rally themselves up for the latter stages of the game. As previously mentioned, Bale was made to look ineffective by the swarming of him whenever he got the ball, particularly by James McCarthy and McArthur, who doubled up on him whenever he received possession. Atypically for Spurs, they undid Wigan with a set piece in the very final minute.

Although it wasn’t quite executed like the training ground model they’d clearly practiced, Tom Huddlestone (who’d hit the post from a free-kick in the first half) played the ball low across the box looking for Bale, yet his miss-kick led to the ball going in off the shins of an unfortunate Emmerson Boyce. Heartbreaking doesn’t even begin to cover it.

To limit Tottenham to two very fortunate goals speaks volumes on how well Wigan defended Tottenham’s threat of Bale and Defoes’ pace; yet also provokes real frustration as the goals could have easily been avoided, particularly the first.

It would be very easy to consider the result as two points slipping from the hands of Martinez and his team, yet the point itself could prove to be vital. The Aston Villa game on the final day of the season is building up to be a straight play off for survival, with the winner taking all and a draw causing some permutations. I think that as long as we’re within three points of Aston Villa with a better goal difference going into that final game, we’ll be in a good position to stay up.

Although it would be nice to win our next three games and be safe before then, realistically we should be aiming to be close to Villa for that final game. The important thing is where we are after the Villa game, not before it. Martinez has often referred to how he tries not to look at the table and just concentrates on results, and I think this is a great philosophy. 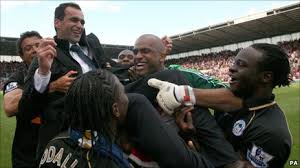 Simply studying the table and working out which results mean what and getting boggled down with calculations and hypothetical scenarios isn’t going to keep Wigan up. Instead, Martinez and his team need to concentrate on improving the performances and planning for the next game. By taking this approach they can get as many points as possible and see where it leaves them before the final game. I’m not saying Roberto should ignore the table, he should be aware of it, but it’s important not to become obsessed by it.

I remember in May 2011 when Roberto commented on how he’d told the players before the penultimate game, against West Ham, that the league has gone and the team now faced two must win cup finals. I imagine the team have adopted the same approach this season and will face their next must win game on Saturday away at West Brom. They’re another tough opposition, but like I said, the team cannot allow this to faze or intimidate them. If the team works hard and imposes their style and philosophy from the off then they are capable of beating anyone, as they have shown in the past.

Before I leave I hope you’ve all secured Wembley tickets and sorted travel arrangements, enjoy what will be a fascinating end to another frantic campaign at Wigan Athletic.