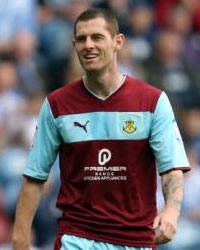 Owen Coyle has made Burnley midfielder Chris McCann his first recruit at Wigan with the 25-year-old passing a medical this afternoon after agreeing to a three-year deal.

McCann arrives at the DW Stadium on a free transfer and will officially become a Wigan Athletic player next Monday July 1st when his current current with the Clarets expires.

Coyle worked with McCann at Burnley during his two years spell as manager and is enthused about his first signing as manager of WIigan Athletic.

“I’m delighted to bring a player of Chris’ ability to the club, and he’ll bring real strength to the group ahead of a demanding season.

“He’s a powerful, attacking midfielder who scores goals, plays from box-to-box and isn’t scared to put his foot in when it comes to winning the ball back.

“I had the pleasure of working with him at Burnley, and on a number of occasions we turned down some big-money bids for him, such was his importance to the team and the integral role he played in helping the club win promotion to the Premier League at a young age.

“He’s still young in football-terms, has plenty to offer and I hope to see him playing a big role at Wigan Athletic.”

Dublin born McCann was a product of the much acclaimed Home Farm youth system in his native Ireland and continued his education with Burnley.

He progressed through the ranks at Turf Moor and after signing a professional contract went on to make his senior debut shortly after his 18th birthday as a 12th minute substitute in a 4–0 victory against Coventry City at the beginning of the 2005-06 season.

He made 23 league appearances that season, 15 of those in the starting line up, finding the net on two occasions and never looked back.

In total he made 269 appearances for Burnley, scoring 31 goals, with his last outing coming in the final day of the season in a 2-0 win over Ipswich Town at Turf Moor.