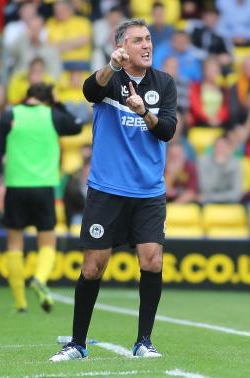 Owen Coyle has become the fourth manager to be sacked this weekend following Wigan’s 3-1 home defeat against Derby County.

Barnsley and David Flitcroft parted company immediately after the South Yorkshire side fell 3-0 at home to Birmingham City yesterday and this was followed this afternoon by the departures of Martin Jol and David Jones from Fulham and Sheffield Wednesday respectively.

Following defeat at the hands of Derby, their third in as many games at the DW Stadium, the message from the Wigan fans was quite simply “Close the door behind you on your way out Mr. Coyle”.

His appointment in June as replacement for the outgoing Roberto Martinez wasn’t exactly met with approval with some actually quite vociferous on the subject.

And it appears that chairman Dave Whelan was of the same opinion as he dismissed his manager after less than six months in charge.

Ironically the nail in the coffin for the 47-year-old came at the hands of the club managed by the very man that he beat to the Wigan job – Steve McClaren.

Coyle’s record at Wigan saw them pick up only 7 wins from 22 in all competition with his charges suffering defeat on no fewer than 9 occasions.