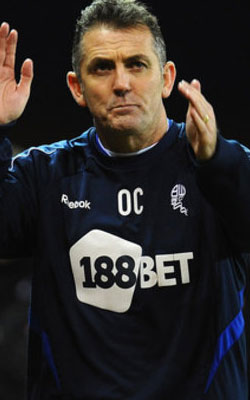 Owen Coyle has officially been unveiled as the new manager of Wigan Athletic at a press conference this afternoon.

The 46-year-old was quizzed by the gathered members of the media about his future plans for the club and the expectations that the chairman will have of him as he prepares for the new season ahead.

When questioned about the squad he has inherited which will need to be prepared to play at least 54 games next season he added: “The chairman has backed managers in the past to bring players in and we need to add to an already talented squad. In regards to numbers, we must add some.”

Coyle also spoke of the rumoured interest in the likes of James McCarthy, Aroune Kone and Shaun Maloney and the departure of out of contract players and dismissed that Wigan are a club that need to sell to survive.

“We accept there are some hugely talented players left here, who will be coveted by other clubs. The chairman has shown through the years that he will not stand in any player’s way if it is the right deal for the club.

“What I do know is that any money will be reinvested into the club, which for a manager, is a huge thing to hear.”

However he was quick to distance himself from any move for the out of contract Kevin Davies, captain during his spell at Bolton.

“Kevin was my skipper and an outstanding player. I think there is a bit of interest in Kevin but it is probably not what we are looking to bring into the football club, although he is an outstanding man.”

“I feel this is the right job and I’m really looking forward to starting work at this fantastic club.”

On the subject of his past record with Bolton Wanderers from where he was dismissed last October following their relegation from the Premier League and poor start in the Championship he responded: “I won’t be judged on the past. I will be judged on what happens at Wigan Athletic.

Roberto Martinez is a great manager but I believe in my own abilities. I managed against him eight times and only lost once.”

Speaking of his newly appointed manager Dave Whelan said: “Owen’s enthusiasm bursts out of him and you can see how excited he is to get started. I think he is the man for the club and everything about him made me want to bring him here.
“I will back Owen 110 per cent. He wants more players and I have told him ‘yes’.

“Any money we receive from player sales will be given to Owen to spend in the transfer market. Our top priority is promotion.”