It’s around that time of the season again chaps. You know the drill, everyone predicts Wigan will go down; we face tough opposition and United come from behind to show the nation why they’ll be top of the pile.

Another ritual of this time of the season is clubs in the Premier League saying if so and so gets relegated, we should sign such a player. Top contenders this year include Charles N’Zogbia, Charlie Adam and Scott Parker.

Wigan came a point closer to rubbing Charles’ name off that list as the Blues managed a commendable 0-0 draw at home to Spurs.

As the calm before the storm goes, this one was a pretty big one. Spurs had key players rested before their glamour tie against Mourinho’s Madrid and Martinez’s men are preparing for a brutal battle to stay in the top flight in these final seven games.

Despite missing out the likes of Bale, Lennon and Gallas from their starting eleven, Spurs were still a big threat. With a starting line up compromising of the diminutive Modric and Van der Vaart, plus the solid Michael Dawson among others, they still had an eleven far more talented than the Latics.

It would be strange then that Wigan had the better chances, which I think was all due to mind set as Spurs would have an eye on their mid week tie and the top four seemingly out of reach, they weren’t in top gear to say the least.

This was a game I managed to get to, and the greatest feeling of togetherness I got from the day was in the concourse before kick off.

I’d just walked into the East Stand and was making my way towards the counter to get my Steak Pie (which had a crust which was too hard for my liking, but that’s another matter altogether); and I looked up on the TV screen to see Rafael winning Man United a penalty.

Usually, this would be greeted with moans and groans, yet considering the opposition were West Ham, I don’t think any of us had celebrated a Wayne Rooney goal with more joy. Judging by his reaction by swearing into the camera, neither had Rooney.

This was the greatest sense of unity I’ve witnessed in a while as a Latics fan, and it was due to seeing the downfall of another club. If we stay up and they go down, I’ll remember this as a turning point.

If I thought that was to be a precursor for the goings on at the DW, I was mistaken, yet a battling performance and a valuable point can’t be complained about.

Of course, we could have snatched all three points as Ali barely touched the ball, and with a bit more invention and movement up front, we surely would have won.

Despite this, chances were still created, N’Zogbia, Cleverly and Rodallega all came close, then Martinez responded to chants of ‘Feed the fish and he will score’ by sending Conor Sammon on. Rumours he took the chant literally and handed Sammon a packet of Jaffa Cakes can be confirmed as false. Maybe that’s why he didn’t score?

Sammon came close when he fired at Gomes, yet his work rate and energy made a difference and showed up how lethargic Rodallega can be. How often do you see him charging down loose balls like the ‘Fish’ did?

Next week it should be a definite three points to boost our survival bid: Chelsea away. The joys.

Beforehand, there was an encounter involving those at the top and bottom of the league.

As previously mentioned, West Ham faced Man United at home, in a game which had three penalties.

Mark Noble scored his two to fire the Hammers in front, yet in the second half United stormed back to take a 4-2 lead and three points back up north.

It wasn’t as easy as the scoreline may suggest, yet after sticking Ryan Giggs as a auxiliary left back and bringing on Chicarito, United turned it around.

Wayne Rooney’s eventful afternoon should have us talking about his great hat trick and his return to form. Yet we’re all left mulling over his childish behaviour, which made his Liverpool roots more apparent than ever.

Swearing into a TV camera can never be judged as acceptable, yet it was funny to see him in such rage following his hat trick. Personally, if I’d just scored a Premier league hat trick, I’d be delighted and wouldn’t be seemingly fuming. Yet it was entertaining to see his ugly mug turn a different shade of green, leaving him red faced later as ‘he’ issued a swift apology. 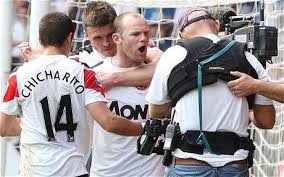 Lets be honest, there’s no way he could have written that. It has far too bigger words such as ‘apologise’ in there. The club must have written it on his behalf.

Yet I was for once happy to see United’s monopolization of referees help them to their win on Saturday, as Nemanja Vidic managed just one yellow card from two trips and a rugby tackle. At least it gave us a bit of a leg up eh?

In the Midlands, relegation rivals West Brom earned a precious three points as managers Hodgson and Dalglish met to settle their issues.

Despite beating Roy to the job at Anfield and providing pressure for him during his short reign in charge, Hodgson came out on top as his underdogs soared under the pressure.

Chris Brunt smashed home two ferocious penalties to give the Baggies a 2-1 win and fire them up to 13th.

I think Hodgson does best when he’s the underdog, he’s a man with great experience but the Liverpool job just didn’t seem right for him.

The fans were desperate for a big name to bring back the glory days and Roy wasn’t that man. He does best when the budget’s tight and the premium basics need working on. Not at a club that percieves itself as a glamour club and wants success now.

West Brom is much better suited to him as he can grind out results and get away with going defensive away from home, something he couldn’t do at Liverpool.

Dalglish still has some work to do it would seem, yet if he can get Cole and Gerrard back plus Suarez and Carroll on form, they could be a force to be reckoned with next season. 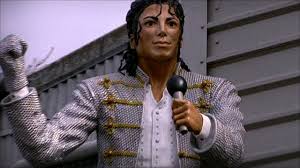 Finally, Mohammed Al Fayed is a tricky customer, so much the Fulham owner thought it would be necessary to build a Michael Jackson statue outside Craven Cottage. This was a disaster waiting to happen.

Although he’s a musical legend, what’s he got to do with Fulham? I’d love to see a statue of John Lennon outside Anfield, or a statue of Spandau Ballet outside the Emirates (only because it would mean they’ve died) yet did MJ have any connections with Fulham besides Al Fayed?

Then there’s the statue itself, well it looks like it’s been made out of cheap plastic if I’m being kind. It reminds me of one of those Kid’s bubble bath bottles you’d find in B&M Bargains or Pound Land.

Following this inevitable criticism, Al Fayed has stated his fans can ‘Go to hell’ if they don’t like it. A bit of transfer news I’ve just heard: Apparently Fulham are interested in a striker called ‘Billie Jean’, stay tuned, this story could be a thriller.

Nice to see he’s getting the fans on his side then. What would we think to Whelan gaining inspiration from the idea and getting a statue of George Orwell outside the DW? Answers on a postcard.

I’ll see you next week, hopefully reporting on a 4-0 away Latics win. There’s a first for everything after all.

Save of the Weekend: Robert Green to deny Ji-Sung Park in the above game, he’s still got a way to go to atone for the Clint Dempsey incident though…

This Week’s Teaser: Which former/current Latics players have appeared in the Champions League (obviously for other clubs)?