The FA Cup was back this weekend which meant Latics were out of action, and had the chance to relax in the sun of Tenerife. It’s alright for some!

Latics’ defeat to Bolton in midweek was a drab affair, with a number of changes to both line ups, Bolton just sneaked it as they looked like they wanted it a little more. Ivan Klasnic bagged the winner, and followed it up with the winner against Fulham in Round 5.

So as a reward for the defeat, Martinez’s merrily crew jetted off to Tenerife; this may seem injustice, yet look on the bright side, a Spanish lower League Reserve team may be looking for new players and could take Gomez, Di Santo and Lopez off our hands. Okay maybe that’s too optimistic, paella anyone?

I, like the 7,000 others in a characteristically low Wigan crowd, wish they’d stayed at home and judging by their performances, so did most of the players.

One positives of the night though was the huge following of youngsters in tribute to Tom ‘Tilly’ Gallagher, who tragically took his own life days previously. That was a nice touch, and there was at least 70 of them, so they counted for 1% of the crowd! Although it was good to see the support, unfortunately they were sat just behind me and a group of screaming girls wasn’t what the doctor ordered for a freezing night at the DW. I could have moved of course, or would that have been plain rude?

Another team that had ‘earned’ a holiday abroad due to the FA Cup is Leyton Orient, and they did it in far more spectacular circumstances than our lot did!

After drawing Arsenal in the 4th Round of the Cup, it looked like it would be a swift end to Orient’s cup run, and so it may turn out to be, but they’ve earned a reply even when it looked improbable. 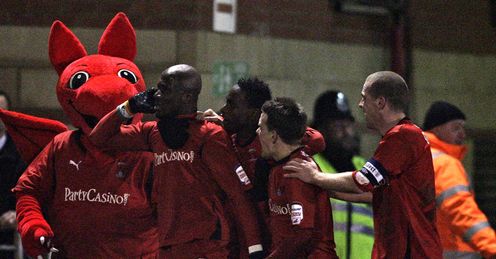 Arsenal’s cultured squad would probably have seen this affair at Brisbane Road as an annoying parasite of a hurdle to jump in their season, which of course they have bigger fish to fry. Yet the likes of Marouane Chamakh, Tomas Rosicky and Andrey Arshavin couldn’t find the firepower to see off the League One side.

Rosicky himself put the Gunners ahead early in the second half after a great battle during the first 45 minutes. For so long it looked like this would be the winner, until substitute Jonathan Tehoue had the final say in the last minute.

The striker earned Orient a replay which will have his chairman rubbing his hands with glee at the thought of all the cash the replay will make him. As he stated on Radio 5Live before the match, the FA Cup has gained his club nearly £1 million in revenue, ensuring a profit for the financial year at least, which not many clubs can boast.

The extra money made from the replay could also go towards the appeal against West Ham’s ownership of the fast becoming infamous ‘Olympic Stadium’.

For the time being, any money Orient have is going towards a holiday to Las Vegas for the squad as a reward for earning a reply. If the can win the replay, the reward will be a contrasting trip to Manchester… for a reply against Manchester United.

To get to the Sixth Round, United themselves had to overcome an inspired Crawley Town outfit, who came mightily close to getting a reply like Orient did.

United’s line up gave Crawley hope as Ferguson lined up with ‘donkey players’ Bebe and Obertan. Neither of which made a great impact besides providing comedy for the viewers, and made you wonder why they’re at a bigger club than the likes of Crawley’s Jamie Cook who looked very tricky on the wing.

Despite United’s goal from Wes Brown, which their first half performance probably deserved, Crawley weren’t about to give in and literally threw the kitchen sink at United in the second half. David Hunt missed a glorious chance from a deep cross; top scorer Matt Tubbs’ overhead kick was Rooney-esque and was heading for the top corner until Brown blocked it; finally, big money signing from York Richard Brodie hit the bar with a late header.

Following their surprise attacking mind set, the media continued to patronize the hell out of Crawley, as if they were a bunch of 12 year old’s pitting their wits against the Red Devils. This frustrates me as, although I like seeing them get the credit they deserve, they’re grown men, and don’t need to be treated like the ‘special set’ at Primary School.

Elsewhere, Chelsea’s nightmare season continued with a defeat at home to Everton, which was actually a 4th Round Replay following each side’s busy schedule.

Chelsea dominated the first half, creating chance after chance with John Terry blazing the best of them over. The second half seemed to be much of the same, but Everton managed to hold on and earned extra time at the Bridge.

Frank Lampard scored the opener which looked like the winner, and ITV carried on the recent tradition of zooming in on Christine Bleakley. Why didn’t this happen with Abbey Clancey and Peter Crouch?

Things did look bleak for Everton, until just one minute to go where our very own local boy Leighton Baines came to the rescue.

Bainesy, never renowned for scoring tap ins shall we say, curled a wonderful free kick past the helpless Petr Cech in the Chelsea goal. That strike ensured penalties to add to the drama at Stamford Bridge.

Leighton mustn’t have known whether to laugh or cry, following his free kick, he then missed his penalty in the shootout to give Chelsea the advantage.

Nicolas Anelka then swung the pendulum once again with his, quite frankly pathetic attempt of a spot kick. He decided, for some reason, to handicap himself to a two step penalty. This made the save easy for Tim Howard and paved the way for an away victory.

Ashley Cole blazed the decisive penalty high and wide into the away supporters to send them crazy. Phil Neville then had to score to win it for the Toffees. His run up was similar to Anelka’s to be fair, yet he smashed his penalty into the top corner and Everton were through. I must point out his celebratory stance as he stood, arms wide and a blank face in a crucifix pose. It was very similar to David Beckham’s rendition of the same pose actually.

This result meant the only silverware up for grabs for Ancelotti’s men is the Champions’ League, is Carlo’s job at risk or is he just plain unlucky? With a misfiring Torres and a benched Drogba, all is not well at the Bridge it would seem.

Save of the Weekend: Tim Howard’s to deny Nicolas Anelka’s penalty, is only for the look on the Frenchman’s face afterwards

Blunder of the Weekend: United flopping foreigners Bebe and Obertan, surely Kleberson and Djemba-Djemba in disguise?

This Week’s Teaser: When was the last time a team from outside the top flight won the FA Cup?