Cup fever hit the footballing nation this weekend, and we had almost everything: upsets, controversy and errors galore, the only thing missing was an away win at the Reebok.

Latics took an army of over 2,000 expectant fans over to our neighbours from Horwich, with at least ten of those arrested, it’s fair to say it lightened up the match.

The game itself must be a contender for the most entertaining 0-0 draw. Of course, like any other away trip, I treated myself to a Chicken Balti Pie, of which I’m growing quite fond of. It was better than my last one at the Reebok, which was lukewarm at best and a bit of a let down. At least I know know what Robbie ‘Flake’ Blake gets up to when he’s on the bench.

Each side had an even amount of chances I’d say, with Bolton’s first arriving in the opening 15 seconds after Adrian Lopez (who surely has the campest run ever?) gifting Johan Elmander a great chance. Luckily, Gary Caldwell was on hand to turn it over the bar, who was quite impressive on the day actually.

Wigan’s main threat was down the left where the returning Victor Moses tore apart Sam Ricketts at full back, he fired one effort wide and later fired across the box for Callum McManaman, who was beaten to the ball by Paul Robinson.

The young, energetic forward got his chance in the first team again in the FA Cup following his goal against Hull in Round Three and his cameo substitute appearances in the League. Despite being up against two giants in Zat Knight and David Wheater, the youngster didn’t look fazed and despite understandably not holding the ball up brilliantly, he was a pest for Bolton to deal with.

Another returning figure was veteran keeper Mike Pollitt who can be best described as a club legend. The moment that defined Polly was his face expression following the Latics’ chant of ‘England’s Number One’ his glance at the fans just said ‘behave yourselves’.

Another moment that brought a smile to my face was when the Bolton fans chanted ‘There’s only one Gary Megson’ at Ben Watson. Even he had to laugh at that one, and there definitely is a resemblance.

The game in a nutshell was a great laugh more than anything, and after sorting out my ticket palaver (where I ordered five and received just four) it couldn’t have gone much better. Well a win would have been nice, but is that too much to ask?

Lets do it all over again a week on Wednesday yeah?

The draw for the following round threw up the fairytale draw: Manchester United vs Crawley Town, at Old Trafford.

United’s route to the fourth round was seemingly simple, yet a 2-1 win at Southampton didn’t go without it’s shaky spells after Richard Chaplow put the Saints’ one up. Yet there was never much doubt that United would turn it around, and so they did due to goals from the returning poacher Michael Owen and Mexican hotshot Chicharito. 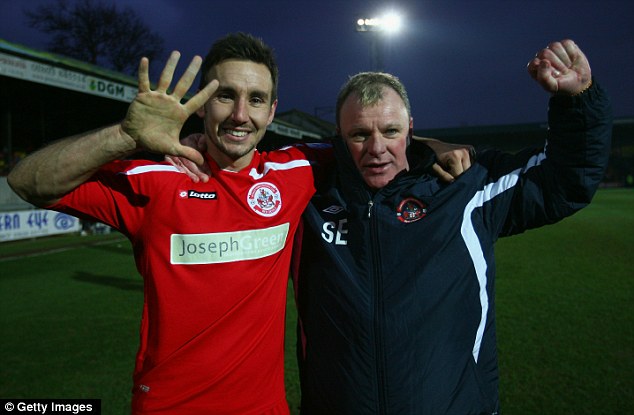 beat a Torquay side just one league above them to earn a place in round five.

The other ‘Red Devils’ also known as the big spenders of the Blue Square Bet Premier, took the lead through one of their summer signings Matt Tubbs, incidentally a former Salisbury player which underlines their fame and fortune. Tubbs’ shot rolled down his knee and went in off his shin after an exquisite first touch to take the ball out of the sky.

Crawley then proved their ‘Englishness’ when it came to taking penalties as they had not one but two saved by keeper Scott Bevan as they wasted their chance to put the tie well out of Torquay’s reach. They then had a man sent off to make it ten a side following a brawl late in the second half, regardless, the non-league outfit held on for a famous win.

Likewise, Notts County were just ten minutes away from a win over super spenders Man City at Meadow Lane, until Edin Dzeko popped up with a winner to equalise for the Blues. Neal Bishop had earlier headed County in front from a corner and Magpies’ fans thought it would be the winner until City broke their hearts to earn a replay.

Other FA Cup shocks include Fulham’s 4-0 thrashing of full strength Spurs, albeit with 10 men for much of the game. League One promotion hopefuls Brighton beat Championship side Watford 1-0 at Vicarage Road, with Gus Poyet simply stating after the win ‘Was nice!’ which was very reminiscent of Borat.

Lastly, Alan Tate must be the most gutted player of the weekend after his inexplicable own goal from a seemingly danger-less situation gifted Leyton Orient a win at the Liberty Stadium. The evergreen captain cost the Swans a replay as he sliced the ball past his own keeper in the last minute. Another culprit of Swansea’s loss was donkey Darren Pratley, who headed the ball in on the goal line, only to be ruled out for offside and cost a goal as former Latic Scott Sinclair’s effort was goalbound anyway. Orient earned an unlikely 2-1 win to set up a tie against Arsenal in round four.