Dave Whelan to be given superb honour 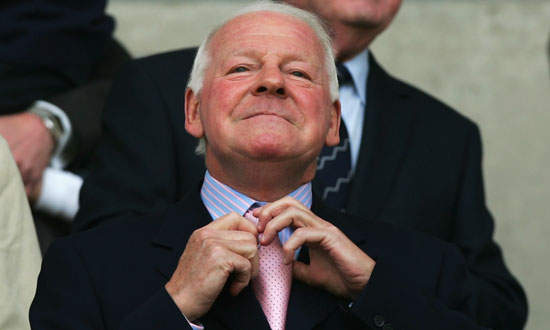 Wigan Athletic will honour it’s long serving owner and former Chairman Dave Whelan on his 80th Birthday. The unveiling will be an open invite on Thursday the 24th November at 2pm

Dave Whelan is owed a lot by Wigan Athletic. Back in the day when ‘Wigan Athletic were just that plucky little club, who was unfortunately playing their game in the back yard of rugby league’, Mr Whelan had other ideas.

From almost going out of the Football League to climb to the top Division in English Football, even winning the FA Cup along the way and throwing an European Campaign.

The man deserves this accolade and I hope many Wigan fans will go along to show their support.

Official statement by the Club reads:
A magnificent bronze statue of Dave Whelan outside the DW Stadium is to be unveiled to the public on November 24, the day of his 80th Birthday – and Latics fans are being invited to attend.

The one and a half times life size statue will depict Mr Whelan on one of the proudest days of his life, as he paraded the FA Cup on the Wembley turf following our victory in the FA Cup Final on May 11 2013.

The statue itself will be seven feet four inches tall, and stand upon a three foot sandstone plinth.

Mr Whelan will be present, along with special guests to be announced over the coming weeks.

Latics Chairman David Sharpe, who along with the Whelan family was behind the idea to commission the work, said: “No one has seen the finished sculpture yet so we’re all really excited to see it in place outside the stadium.

“We feel it will be a great tribute to him and the legacy which he has created for the town of Wigan and it would be fantastic to see as many supporters as possible down on the day to share what’s going to be a really special moment.”

The statue has been produced by renowned sculptor Sean Hedges-Quinn and will sit directly outside the main reception of the DW Stadium, where work has already begun to lay the foundations.

The grand unveiling is a free event open to the general public. Supporters are urged to arrive by 1.30pm, with speeches and a live brass band before the actual unveiling by Mr Whelan himself takes place around 2.00pm.