Outgoing Chairman David Sharpe has penned a letter to all Wigan Athletic fans via his Twitter ahead of his resignation as Chairman on completion of the impending sale of the club.

Sharpe took over the reigns from his Grandad in 2015 and has overseen two League One title winning seasons in his time at the helm, but has announced that the time is right for him to also leave the club once the sale is complete.

To the Wigan Athletic supporters and employees, 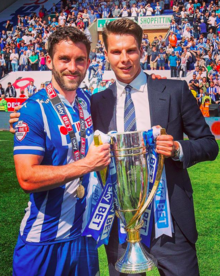 A little over 12 months ago, after many emotional meetings between my family, we made the decision, that it was the right time for us to step away as the owners of Wigan Athletic Football Club. At the time I believed we still had unfinished business with Wigan Athletic and I proposed three objectives: recruit a manager who understands the ethos of our great football club and one who would get us back into the Championship, bring together a team of people to package the sale of the club and finally identify a suitable owner with the funds and ambition to carry on the family legacy. I am now able to announce those objectives have all been met and the imminent closing of the sale is upon us.

With that in mind, I have decided to step down as the chairman of Wigan Athletic upon completion of the sale and officially mark the end of 23 years under Whelan family ownership. I would like to take this opportunity to thank all current and past employees who have worked so hard for the club and to all of the supporters for your continued passion and commitment through the ups and downs of football.

The supporters are the heart and soul of every football club. Our supporters in particular, through thick and thin, from League Two to the Premier League, from Springfield Park to Wembley, from Grimsby Town on a Tuesday night to Rubin Kazan in the Europa League on a Thursday night – you have been with us every single step of the way. You will always be proud, wherever you are in the world, to tell people you support Wigan Athletic, and that’s what makes you special.

From a personal point of view, Wigan Athletic is all I’ve known since the age of four. Many children have the dream of playing professional football for the club they support. My dream was slightly different and one that is beyond the realms of reality. I always had my heart set on running Wigan Athletic. I am of course still young, but to be able to look back on my three and a half years chairmanship having seen my club achieve two league titles and beating Pep Guardiola’s Manchester City on that incredible Monday night to reach the quarter final of the FA Cup, it will quite simply be the proudest three and a half years of my life, and nothing will ever change that.

My grandfather will of course have his own words, but I would just like to state what a privilege it has been to follow in his footsteps. He is Wigan through and through and his passion for Wigan Athletic has never flickered.

On behalf of the family, I would like to take a moment to thank in particular the managers we have worked with. The traditional approach of a chairman and manager partnership has always been a very important relationship for us.

Coming back to one of my initial objectives over 12 months ago, I would like to wish Paul Cook all the continued success. I always had great confidence in his ability, but what he has managed to achieve in galvanizing the whole club from players through to supporters is special. Paul is a great person and a great manager; we are lucky to have him and his staff at Wigan Athletic.

As well as Paul and the staff, of course there is the squad of the players, I believe they can all achieve great things together this season and in the future. They have given me some special days and nights and I only wish them all the best in their careers.

From Jonathan Jackson down to every single member of staff across the football club and stadium, your endless hard work, care and loyalty to Wigan Athletic and my family has never gone unnoticed. We massively appreciate every one of you and I cannot thank you enough. In addition, I would like to thank my fellow board members my brother Matthew, Jonathan and Garry Cook who have all assisted in the navigation of the football club in recent years.

While new ownership beckons and we enter this new chapter, I am sure you will all join our family in wishing IEC every success for the future. I will make myself available to ensure a seamless transition and of course my resignation is subject to completion but I am sure you can all appreciate there is always a point in time to move on and this is it.

This announcement allows me to reflect but also look positively towards the future wherever my path takes me next. I will be staying within football. It is an industry like no other.

Finally, I would just like to say thank you to my grandfather and my family for this opportunity.

The club have invited all fans to observe a minute’s applause in the 23rd minute of Sunday’s game as a thank you to the Whelan family.