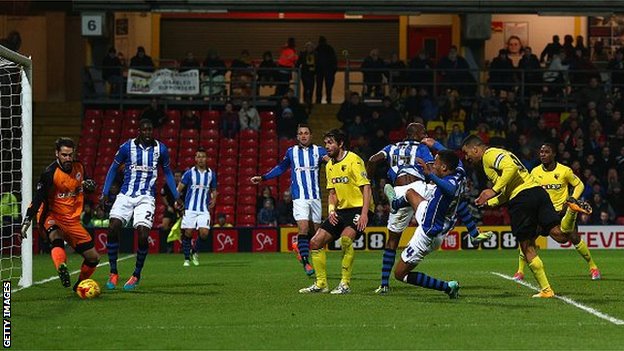 Troy Deeney’s brace helped Watford to back to back wins as struggling Wigan go 7 games without a win. Another week and another winless weekend goes by for Malky Mackay and Wigan Athletic as all their hard work and effort was to no avail as they left Vicarage Road with their head in their hands.

Another week and another winless weekend goes by for Malky Mackay and Wigan Athletic as all their hard work and effort was to no avail as they left Vicarage Road with their head in their hands.

Wigan’s poor start to the season and lack of confidence showed in the opening stages of the game with misplaced passes, displaying little confidence on the ball.

Watford’s early pressure was rewarded midway inside the first half via a quick free kick. The ball found its way from the set piece out left to Ikechi Anya who nodded on a teasing ball that was latched onto by Deeney who fired low past Scott Carson to give the Hornets a well deserved lead.

As the half wore on Wigan grew a foothold in the game, seeing more of the ball whilst having some purpose on the front foot. Watford looked set to go into the break with a narrow lead but Wigan struck an equaliser similarly to as they did against Sheffield Wednesday via Chris McCann. James McClean’s dangerous in-swinging corner was duly met by McCann who fired an emphatic header home to level the game up on the stroke of half time.

Wigan started the second half as they finished the first. Showing a great deal of attacking the intent, matching Watford stride for stride. Ben Watson went close with a glancing header before James McClean forced a smart save out of former Spurs keeper Heurelho Gomes. However Slavisa Jokanovic’s side had the last laugh 8 minutes from time.

The ever dangerous Ikechi Anya proved provider once more as he scampered down the right hand side. The Scot then put in a teasing floated cross towards the back post which was met by an oncoming Troy Deeney who nodded down into net for his and Watford’s second of the afternoon to snatch all three points for the host.

Malky Mackay said he would have been disappointed with a point in the second half following his team’s performance when he spoke to the Club Website after the game:

“I can’t be too hard on them, though, after playing as they did because I thought we started really well and then I thought Watford came into it and got the goal which was a sloppy one as far as we we’re concerned.”

“As the first-half wore on, I thought we wrestled it back and deservedly got the goal and went in even at half-time.”

The result still leaves the Scot’s side lurking in 23rd, 4 points from safety (with what has turned into a six pointer) going into the game against Rotheram United on Saturday. When will we kick start our season?