Diame has them fighting in the dressing room 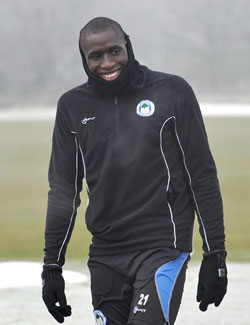 Following the usual attempts by the Brittish press to put down Wigan Athletic and Wigan in general, Mohammed Diame has called on his team mates to fight stronger and make our winning games speak for them.

The newspapers and journos of many media have constantly ignored the facts and chose to print/say bollocks to make our great Club and Town look silly or rediculous.

But this week they seem to have hit a nerve in the dressing room and it is being turned into a positive energy as the Club statement says:

Latics’ French midfielder Mohamed Diamé says the club and its supporters should use the ‘foolish’ headlines written about him and the club this week and turn them to our advantage in the coming weeks.

Diamé is hoping to be in the squad to face Bolton Wanderers in the FA Cup tomorrow after scoring twice in the previous round at Hull City, and he says that he hopes that the real supporters of the club will take the recent coverage for what it is – ‘complete rubbish.’

“We are a group of people that criticism makes stronger,’ he told the club’s official website in the build up to tomorrow’s match, “the sort of complete rubbish written about me this week has just given us all a good laugh and made us far stronger as a group.

“The real point is that we must all stick together as a club – players and supporters – and fight to get out of the situation we find ourselves in.

“There is huge belief in our dressing room, definitely the best I’ve known in my career, and that will bring us through this tough period.”

Talking about the coverage this week, he added: “Amazing, I never thought saying Madrid was different from Wigan would be a problem, but The Sun newspaper used a picture of a row of closed shops in a suburb of town and compared it to the capital city of Spain! Crazy! But to be honest I can see the funny side of it.”

However, Diamé says the story that really upset appeared in another newspaper, The Daily Mirror.

“They accused me of attacking the club, which is simply a lie. I would never do that. People can read the article for themselves, show me where I have critisised the club!! It simply is not true.

“I now understand how the press can be over here. They didn’t use any of the good things I said in the French article, picked out one of two flippant things about the town and English women and then turned everything on its head.”

Now Mohamed says the team should do their talking on the field. “We need to put all this nonsense behind us, forget about me, or what any other individual thinks, and fight together for the club, the fans and the town.

“We will be doing everything we can to get through to the next round of the FA Cup, and then concentrate back on a massive week for the club next week, when we have two important games in the league.

“This is when the whole squad needs to be focused on the only thing that matters, helping the club progress.”