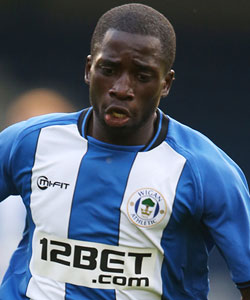 Wigan Athletic have bid farewell to French winger Nouha Dicko after the 21-year-old agreed a 2½ year deal with League One side Wolverhampton Wanderers.

Dicko joined Wigan from RC Stasbourg in August 2011 as a free agent after the French club fell into financial difficulties and were relegated into their domestic league’s third tier.

He impressed whilst on trial at Wigan, featuring in both pre-season matches against Preston North End and Villarreal, and was given a three-year deal at the DW Stadium with the youngster regarded by Roberto Martinez as one for the future.

However opportunities in Wigan’s first team squad had been somewhat limited with Dicko failing to make a single league appearance for the club and only seeing first team action on nine occasions in cup competition.

He was sent out on loan twice to Blackpool where he made a total of 38 appearances, scoring 9 goals, before further loan spells with Wolves and more recently Rotherham United.

Dicko spent just over a month at Wolves and turned out for the West Midlands side 4 times (3 of those from the bench) and found the back of the net once but it was his time at the New York Stadium with Rotherham that turned a few heads.

He joined Steve Evans’ side towards the end of November, scoing six goals in just six appearances, and the Millers manager had hoped that Wigan would consider sending him back on loan after his recall.

Last week Uwe Rosler confirmed, however, that the club had received two firm offers for the player and Kenny Jackett, who had previously expressed an interest in signing Dicko whilst manager at Millwall, has stepped forward and snapped him up to take him back to Molineux for an undisclosed fee.

Making his debut for Wigan on September 13th 2011 as an 86th minute replacement for James McArthur against Crystal Palace in the Carling Cup Second Round defeat at Selhurst Park, he made just two starts in a Wigan shirt.

His first came at Macclesfield in the FA Cup Third Round last season, followed by a place in the starting line up in the 5-0 defeat at the Etihad Stadium in this season’s Capital One Cup.