Administration – Does Wigan Athletic have a future?

12 hours after thrashing Stoke City 3 -0 at the DW Stadium, Wigan Athletic fans were told this morning that the club had been put into Administration.

Shocking, depressing news to hear and hard to take given the promises the new owners were giving just 4 weeks earlier.

As the stories are circulation, we don’t know what is true, but after talking with someone close to staff at the club, this seems to have come as much of a shock to them also.

The management had absolutely no way of knowing this was going to happen until hours before. The administrators had already been called in and there was nothing anyone could do about it. 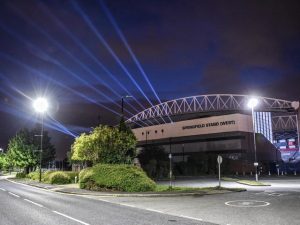 Usually a club goes into administration because it owes money, but Latics are not in that position, so why do it?

Probably it is because the new owners realised the magnitude of UK football and got scared, but they did this totally the wrong way.

Why not wait 3 weeks until the season end, why not ask to see if there was a buyer before bringing administrators in?

All they have done is place a shit load of pressure on the team to get themselves 12 points from the relegation zone so that we can carry on in the championship next season.

One thing that is resonating around the ground is that we are able to pay wages and complete the season, no money is owed.

Finding a new buyer is made easier when we are a viable club, we own our stadium and receive a rent (albeit very behind on payments allegedly) from the rugby club which also plays there. We own our training grounds and we have a lot of playing assets.

Let’s just hope someone comes forward very soon and carry on the good work of the playing staff into next season.