Doncaster Rovers – the man in the middle 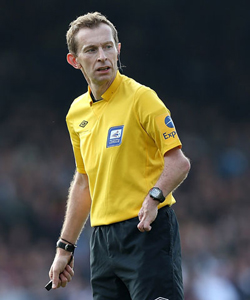 What do we know about referee Keith Hill the man appointed to take charge of Wigan’s game against Doncaster Rovers?

Hertfordshire based Keith Hill has been given the task of refereeing this weekend’s game between Doncaster Rovers and Wigan Athletic – Wigan’s first visit to Doncaster since 1997 and their first ever visit to the Keepmoat Stadium.

He first got the taste for officiating at the age of 15 when he volunteered to run the line for a game involving his brother Christopher’s team, St Thomas Colts in Hertfordshire.

The former sales manager and former FA regional referees’ manager for East Anglia jetted off in March 2011 to train the referees over in Japan, where he remaining until January 2013.

He has also had spells passing on his skills in Dubai, South Africa, Ecuador, Malaysia, Saudia Arabia and Afganistan.

He has refereed only two games involving Wigan Athletic but you’d need to cast your mind back to August 31st 2002 when Latics were the visitors to Colchester United’s Layer Road.

Paul Jewell’s side lost 1-0 that afternoon thanks to a superb goal from 18-year-old Dean Morgan and to add insult to injury also had Tony Dinning sent of by Mr. Hill for rash challenge on Joseph Keith – and Dinning fully deserved it.

The only previous time the the 45-year-old has been involved in the middle of the park for a Wigan game came on April 29th 2000 against Wrexham in a Nationwide League Division Two game when substitute Roberto Martinez found his way into Hill’s book at the JJB Stadium.

Karl Connolly struck for the visitors in the 10th minute to seal all three points against John Benson’s promotion chasing side.

Latics’ FA Cup goalscoring hero Ben Watson was dismissed for a second yellow by Hill whilst on loan at QPR in October 2009 at Swansea’s Liberty Stadium.

The West London side lost 2-0 that evening and also had Martin Rowlands sent off for a second cautionable offence.

Past Wigan Athletic players who have seen red during games refereed by Keith Hill include Jason Koumas who received a straight red playing for West Brom in a game against Stoke City at the Britannia Stadium at the end of the 2003-04 season.

Former loan striker David Thompson, who signed off his brief spell at the club with a goal at the last ever game at Highbury, picked up two yellows plying his trade for Coventry City against Millwall at the Den in November 2001.

To date this year he has shown 67 yellows and 2 reds in the 20 games that he has been involved in.