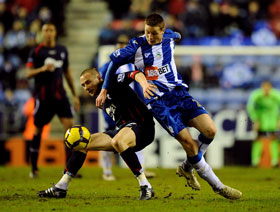 As we saw against Bolton the other night, the DW Stadium pitch is looking a bit worse for wear at the moment and in the short term at least, it doesn’t look like getting any better for Wigan Athletic’s passing football style of play.

With the return of the Super League season coupled with the Premier League run in, the DW Stadium pitch will be under a constant strain week in week out. However after looking at the Warriors fixture list there is a spell in May where they do not play at home at all. That’s great news for the ground staff at the DW but it does not benefit the Latics in any way.

Logic would suggest that the Warriors would have their month away from the DW in either February or March, but as the fixtures have shown this comes during the end of the Premier League season. No one team are to blame about the current state of the pitch but fans on both side of the fence can understand that both teams playing their week after week will not help the condition of the playing surface.

Following Wigan Athletics game against Bolton Wanderers on Wednesday, Roberto Martinez noted that the pitch was in an awful state and this is something that showed during Wigan Warriors game against Hull KR on Friday evening.

The playing surface at the DW is relatively new and sports fans would assume that the playing surface would be able to cope with two sports being played on the pitch. However, it seems that most of the damage has been done during the winter period when Wigan Athletic have been playing and not whilst the rugby season has been in session.

The problems all seem to have arisen from the really harsh spell we had over the New Year period when the undersoil heating was on full power for a number of weeks. There developed a few areas of damaged turf roughly half way between the goal mouths and half way lines in both halves of the pitch.

Sky Sports, the BBC and the paper media have of course jumped at the chance to slate us again, raising the issue of the playing surface of the DW Stadium pitch that deteriorated even more over the past couple of weeks. The undersoil heating broke down for a period of time when the cold was at its worst, this could have been a contributing factor also.

With other teams such as Hull City sharing with local rugby team Hull FC and Reading sharing with London Irish many people will feel that the pitch will be able to hold up like at these other sports grounds but for some reason the DW is not up to the standard. Other contributing factors could and possibly will include the fact that the DW is built on marshland.

As the season comes to a head, the surface may force the Latics to ditch the passing game across the pitch and adopt a more aerial route. Martinez admits that the pitch is not a great surface but makes the point that “The pitch is the same for the two teams so it’s not an excuse.” This is true but the state of the pitch is making it almost impossible for passing football to be played.

All together it seems like the Premier League, Wigan Athletic and Warriors and Super League officials need to sit down each year and agree a period when sport will not be held at the DW to offer the best possible playing surface for both clubs. Next season this could happen but in the short term the pitch is going to deteriorate.

It looks more than likely that that we will need to relay the pitch, but once again, there is very little time this can be done as the Super League season continues through to the start of the next season, maybe the rugby will be made to re-arrange a game or two for this to happen rather than it becoming a case of making do for both teams.