ESPN has found us – Bolton and Man Utd games moved 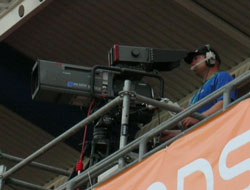 Yes there is another game to be moved as well as the Stoke one in December, this time it is Bolton’s visit to the DW Stadium that has the honour of being televised.

Yes it’s official, ESPN have finally landed in Wigan. After sending a few girls on a scouting mission at the beginning of the season, they stumbled across the DW Stadium; this news has now filtered back to HQ resulting in us being on TV with them over Christmas, making us move yet another game.

Three months after ESPN took over the rights from the bankrupt Setanta Sports they have finally realised that Latics play in the Premier League as well as the other 19 teams (who have all featured already).

Anyway the bad news is it means that the game against Bolton at the DW Stadium that we were to play on Saturday the 19th December has now been moved to Monday the 21st December with an 8 p.m. kick off.

The game against Manchester United at Old Trafford will also be moved from Monday the 28th December, to either Tuesday the 29th or Wednesday the 30th December, we will confirm when we receive details.