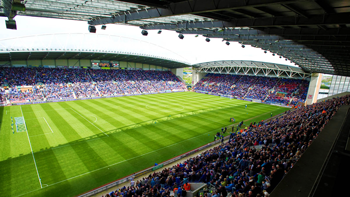 With the first two rounds of Europa League matches behind us, it’s time to take an early look at how Group D is playing out around Wigan thus far.

Of course, there are 4 match days left in group play, so anything can happen. However, there are some factors we can use at this early stage to look at which teams seem to be in the best shape to advance from the group. The first are the current standings (which you can view at UEFA online) and schedule. The second is the betting odds for each group, which we’ll be pulling from Betfair news. This is an online casino with a comprehensive sports book that covers not only the Europa League winner, but also gives odds for each individual group. So here’s our early look at the action in Group D, and how things are shaping up for each side.

Rubin
Winning 5-2 at Maribor and dominating Zulte Waregem 4-0, Rubin has not only gotten off to a 2-0-0 start to lead Group D, but has done so in decisive fashion, with 9 goals forced. Incidentally, Betfair gives Rubin runaway odds to win the Group, with the fixed betting ratio set at 1/50 (meaning to win just £1 betting on the club to win the group, one must bet £50). Worth noting, of course, is that Rubin has gotten its easy schedule out of the way early, with both matches against Wigan still to come.

Wigan
The 0-0 draw at Zulte Waregem was not a good way to start group play, but on the other hand stealing a point on the road is never a poor result. Wigan followed this up with a strong 3-1 victory over Maribor to bring its point total to 4 after 2 match days – good for 2nd in the standings, and amounting to the 2nd best odds to win the group at this stage. Wigan must play well in the October 24 home match against Rubin to stay on a strong pace.

Zulte Waregem
This club has managed just 1 point thus far, in the draw with Wigan, but has already gotten its match at Rubin out of the way. Back-to-back home and away matches with Maribor are a good opportunity for Zulte Waregem to perhaps grab 6 points and get into the mix atop the group.

Maribor
It’s safe to say Maribor is already falling well behind the group, having lost lopsided matches to both Wigan and Rubin. As mentioned, the next 2 matches will be away and home against Zulte Waregem, and Maribor must acquit itself well in these matches to stay (or rather, become) relevant. The 11/1 odds against Maribor winning the group are by far the longest in the group, and it certainly looks as if this side won’t make the knockout phase.

Our picks to advance: It looks like Rubin and Wigan are indeed the safe bets.