Fortune to shine on Wigan 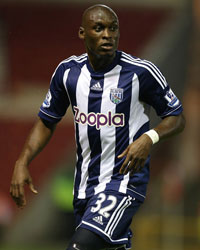 Wigan Athletic are close to making West Brom striker Marc-Antoine Fortune their sixth signing of the summer with the 32-year-old Frenchman set to put pen to paper on a two-year deal.

Fortune spent the last three seasons with West Brom but had previously joined them on loan from Nancy in the January 2009 transfer window for the remainder of that season.

West Brom were relegated from the Premier League at the end of that campaign and manager Tony Mowbray departed the club to join Celtic.

One of his first acts at Celtic Park was to sign Fortune on a permant deal for a fee of £3,800,000 but, following Mowbray’s dismissal at the end of March 2010 and the arrival of Neil Lennon, Fortune fell out of favour and was allowed to leave with West Brom quick to pick him up for an undisclosed figure.

During his time with the Baggies Fortune has made 71 appearances, almost half of them for the bench, and scored 9 goals. He also spent a month on loan with Doncaster Rovers at the end of 2011 where he made 5 starts with one goal to his credit.

Fortune is available on a free transfer after letting his contract run its course at The Hawthorns.

He is seen as a perfect replacement for Arouna Kone who is expected to join his former gaffer at Everton in the next few days.

Wigan manager Owen Coyle has been extremely busy over the last week or so with Chris McCann, Stephen Crainey, Thomas Rogne, James Perch and just yesterday afternoon Scott Carson all agreeing to join Wigan as they bid for a speedy return to the Premier League.