Four for Boselli and Wigan Athletic 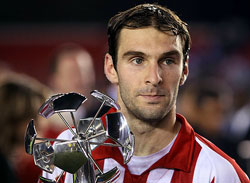 Let’s hope Wigan Athletic fans will be hearing more of that as Argentinian striker Mauro Boselli pens a four year deal to play at the DW Stadium.. The speculation over the last three or four weeks has now drawn to a close as Estudiantes star striker agreed to be heading the Latics attack for the next four years. It is believed that he has cost in the region of £8million (at an educated guess, more than the Cherry and Sh**es entire squad – maybe even more than Superduper League’s entire squads) and has been in prolific scoring form since joining them back in 2008 with 32 goals in 57 games.

It is a massive coup for Wigan and the gaffer as we look to push on after achieving Roberto’s first goal of staying up, the next two seasons are now about settling and pushing on for that illusive top ten place and maybe even look at a European spot.

Boselli has spent the last few days agreeing terms and taking his medical and is now fired up for the start of the season and preseason. Martinez has said that there is more to come and if it is of this quality we can’t wait. The full statement is as follows:

Wigan Athletic are delighted to confirm they have reached an agreement for the transfer of Argentina international striker Mauro Boselli from Estudiantes, for an undisclosed fee.

The 25-year-old has been in Wigan over the past few days to undergo a medical and agree terms on a four year deal and has already declared: “I can’t wait to start.”
Latics manager Roberto Martinez is hailing the move as a ‘massive coup’ for the club, as the Argentine hotshot, who has netted 32 goals in just 57 appearances for Argentine giants Estudiantes, is considered to be unlucky not to make the Argentina squad at South Africa 2010.

Boselli will arrive back in England in a fortnight alongside this summer’s other confirmed new arrival, Paraguayan international defender Antolin Alcaraz and Martinez is thrilled with his capture.

“Mauro is a goalscorer, who lives to put the ball in the back of the net and he is somebody we have been looking at for a long time,” he said.
“At 25-years old he is at a perfect moment in his career to come and play in the Premier League, and he has all the right qualities to make his mark at this level. He is a clever player, a natural finisher who can cause havoc in the penalty area, and he gives the team some great new options with the variety of roles he can play.

“We want him to reach his full potential here and bring plenty of smiles to the Latics fans.” Martinez added: “These deals with clubs on the other side of the world are very difficult to complete and it has taken many hours of to-ing and fro-ing until everything was settled. I would like to play tribute to Chief Executive Brenda Spencer who has worked tirelessly to get this deal through.”

Boselli finished as leading goal-scorer in last season’s Argentine Primera Clasura, a break-away tournament from the Argentine Primera, with 13 goals.
Since joining Estudiantes in 2008 his strike-rate has been extremely impressive, scoring 32 goals in just 57 appearances, and earning his first full international cap for Argentina against Ghana last year.

Boselli is delighted to have secured the move to England and says he cannot wait to start.

He becomes Latics’ first Argentine in the Premier League era, although left sided defender Gino Padula made four league appearances for the club in the 2000-01 season.