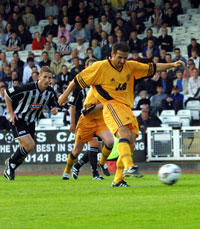 The friendly game against La Liga side Almeria has been cancelled but Wigan Athletic have been quick to arrange new opponents for the game set to be played on Saturday August 8th.

Due to the Spanish side deciding not to travel to the United Kingdom due to concerns over the swine flu outbreak officials at Wigan Athletic have quicky organised a friendly game against Scottish Premier League side St. Mirren at the DW Stadium with the same kick off time of 3pm.

The Saints finished second bottom in the SPL last season and in fact only escaped relegation on goal difference by the slenderest of margins to Inverness Caledonian Thistle.

Wigan last played St. Mirren at Love Street in a pre-season friendly back in July 2001 with an Andy Liddell spot kick added to by a rare Ged Brannan goal securing victory in what was Paul Jewell’s first game in charge.