From Macclesfield With Love

In the middle of another typically arduous season, what the doctor ordered for Latics fans was a trip down memory lane. The FA Cup Fourth Round tie at Macclesfield provided exactly that in what was billed as the tie of the round. Would it deliver?

After coming so far since Whelan’s takeover in 1995, I think it’s brilliant that Wigan fans haven’t forgotten where the club has came from. Most Premier League away games may fail to do this, but the attraction of nostalgia brought 2,000 Wiganers down to Cheshire for what was a league fixture fourteen seasons ago. On a personal level, the Moss Rose was the ground I first visited as a nipper and the opportunity to watch the Latics there was one too good to turn down. I eventually managed to bag the hottest ticket in town and headed to the John Askey Terrace hoping the occasion would live up to its billing. 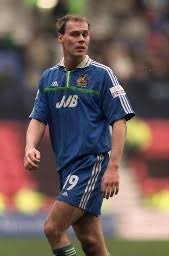 True to its word, the fixture did provide remnants of days gone by; it wasn’t long before the away end were digging out chants in tribute of Andy Liddell, Jason Roberts, Nathan Ellington, Gary Teale and Lee McCulloch. This was until they were interrupted by my personal favourite from the day: “There’s only one Stefan Bidstrup!” If you’re being harsh, you could suggest some of the Latics performances on the day resembled Stefan and co, but more on that later.

As the very enthusiastic stadium PA announcer did his best to make the atmosphere as electric as possible, I thought we were all set up for an entertaining match. I may have been mistaken but at least we had a decent atmosphere, it might not have been of the Glasgow derby variety but it was an old school away day. I’m not sure how successful the ‘ARE YOU READY!?’ tactic to provide a catalyst for noise would work with 800 odd fans in a Blue Square Premier fixture though.

The stadium announcer also emphasised that this was ‘the greatest day in the history of Macclesfield Town FC’, which some of the fans around me responded to by bellowing “f**k off!” and by lobbing the odd flare onto the pitch. I can’t help but think this wasn’t quite the standard procedure for the greatest match in a club’s history.

The game itself started brightly actually. I was interested to see how our younger players would cope with the occasion and the big deal that is first team football. In the first six minutes we were shown a positive answer, with Jordan Mustoe and Callum McManaman combining down the left wing to earn a penalty. After beating right back Ryan Jackson for pace, Callum then outfoxed Thierry Audel for skill and a clumsy tackle sent the winger to the ground. A lot of groans were heard when Jordi Gomez stepped up, but his record from the spot for Wigan isn’t a bad one so I was fairly confident he’d score. He just about proved me right when his left foot shot hit the net after debutant keeper Joe Anyon’s touch wasn’t enough to push it around the post.

From then on, Latics probed in midfield and kept the ball reasonably well but didn’t create many clear cut opportunities. Nouha Dicko and Callum McManaman both went close, but the best chance of the first half probably fell to Angelo Henriquez, whose left foot shot went over from the edge of the box. This left Callum McManaman miffed at the absence of the pass that would have sent him clean through.

Macclesfield though didn’t end the half without threat, with their little Jack Russell on the wing Jack MacKreth breaking down the right on several occasions. As ever with Macclesfield though, a quality final ball was often lacking and the composure required to undo the Latics defence was generally absent. Far too often decent shooting opportunities were presented, but rash finishing sent the ball high and often wide of debutant Joel Robles’ goal.

The second half saw very little threat from the Latics as they failed to impose their Premier League quality on Macclesfield. Instead, the Silkmen imposed their typical lower league determination and work rate on Wigan, and they had little answer for it.

As the game went on, Macclesfield threw some long balls into the box to test the defensive abilities of Wigan’s backline. Although there were some shaky moments, Wigan just about dealt with everything that was hurled their way. Maynor Figueroa was a leader at the back and was one of the few players that really accentuated their top flight ability and composure on the ball, the clear man of the match for me.

Having said that though, Callum McManaman was very impressive on the left wing with his skill and pace and he was the player who unlocked Macclesfield’s defence for the goal. He certainly has great potential and it was great to hear he’s just signed a new contract, hopefully we’ll see his ability on a regular basis in the next few seasons as he’s too good to be wasted in the reserves. Behind him, Jordan Mustoe was solid at left back and looked very comfortable on the ball. As a converted left winger, it’s clear to see where he gets his attacking threat from and is definitely one to watch.

f Roberto’s new signings started the match and I think it’s fair to say that the jury’s still out on the trio. I can’t imagine Joel would have envisaged a trip to a chilly Moss Rose Stadium when he started the season at Atletico Madrid, yet that’s what reality threw at him as he stood in the goal mouth, probably feeling very far from home. He wasn’t tested too much but did look shaky with one dodgy punch, his kicking also tended to swerve off to the left in the second half which wasn’t helpful. Roger Espinoza (or Micky Flanagan as I call him) had a steady game and looked decent in possession but couldn’t find a killer pass. As for Henriquez, he looked anonymous for large spells of the game, but that’s par for the course with a typical poacher, isn’t it?

The day itself might be considered a little bit of an anti-climax, as the Silkmen’s greatest match ended in a dire 1-0 defeat. Macclesfield probably deserved a replay but couldn’t find the quality for an equalizer; whilst Latics put in a very abject performance which was only just enough to squeeze them into the next round. Having said that, I’d much rather go back to reality at Stoke City on Tuesday night than at Ebbsfleet.