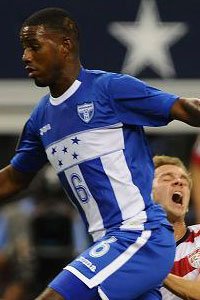 Wigan Athletic have completed the signing of Honduras international Juan Carlos Garcia on a three-year-deal.

The 25-year-old defender, who joins on a free transfer, has agreed personal terms and will meet up with his new team mates following international clearance.

He started life at Marathon where he came through the youth ranks before joining Olimpia in July 2010 – the club also represented by Figueroa, Palacios and Thomas.

Speaking to the official website Wigan manager Owen Coyle spoke of his latest signing: “Juan is a very talented player, a left-back, powerful and someone we’re very happy to be bringing to the squad.

“He scored a tremendous goal for his country not too long ago so it’s nice that he’s got an attacking mind in his locker, but obviously he’s coming in for his defensive abilities which will bring a lot to the group.

“Honduras internationals have a very good history at Wigan Athletic and we certainly hope he becomes another success story for us.

“It’s an area of the team we’re still looking to strengthen after a number of defensive departures at the end of last season, and we’re leaving no stone unturned in doing so.”

Garcia has represented his country on 29 occasions and has found the net once, a spectacular bicycle kick against the USA in a World Cup Qualifier in February, a game that Honduras went on to win 2-1.